The lawsuit makes a series of allegations, including violations of constitutional due-process and equal-protection rights. 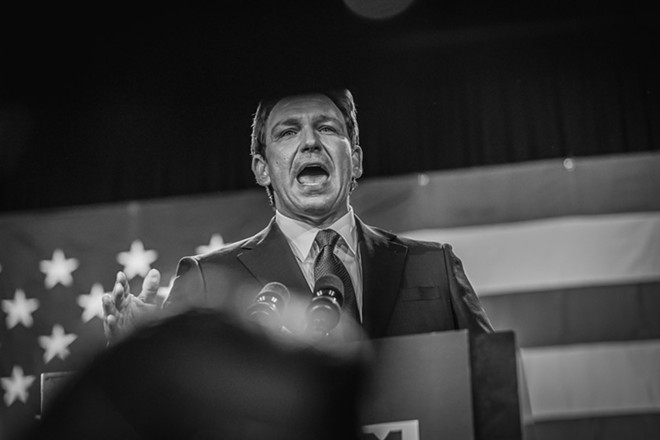 The lawsuit makes a series of allegations, including violations of constitutional due-process and equal-protection rights.

The Florida Legislature, at DeSantis' request, steered $12 million in the state budget to the Department of Transportation “for implementing a program to facilitate the transport of unauthorized aliens from this state consistent with federal law.”

The money for the program, which didn’t appear in early versions of the state budget during the 2022 legislative session, was tucked into the appropriations bill while House and Senate leaders were reconciling differences in their proposed state spending plans. The budget was passed a few days later.

The lawsuit in part maintains that the inclusion of the money for the relocation program in the budget violated the state Constitution. “An appropriations act is not the proper place for the enactment of general public policies on matters other than appropriations,” the 28-page legal complaint said.

The program “should have been scrutinized through the legislative process substantive legislation, not slipped into the annual appropriations act,” the plaintiffs’ lawyers wrote.

The plan drew international headlines in September after state transportation officials dipped into the fund to pay for charter flights to transport about 50 migrants from San Antonio, Texas to Martha’s Vineyard in Massachusetts. The planes stopped briefly in North Florida before landing on the island.

DeSantis, who is widely considered a potential 2024 Republican presidential candidate, frequently rails against the Biden administration’s policies and blasts the president for an influx of immigrants at the southern U.S. border.

The lawsuit filed Wednesday in the Middle District of Florida is one of several legal challenges to the flights and the program, including a potential class-action lawsuit filed in Massachusetts on behalf of migrants who say they were tricked into getting on the planes.

The lawsuit alleges in part that the Florida effort unconstitutionally discriminates against Black and Hispanic people or “unauthorized aliens” or both.

“Whether located in Texas, Florida, or parts unknown, there is no doubt that the intended targets of the ‘relocation program’ are people of color arriving from nations south of the U.S./Mexico border,” the complaint said. “Spending $615,000 to transport asylum-seekers from Texas to Massachusetts does not further a legitimate interest, it merely perpetuates xenophobia and hate by targeting Latin American and Caribbean migrants.”

“The discriminatory intention behind this law is clear to see when not read in a vacuum,” the lawsuit said, pointing to recent efforts by Florida lawmakers to target so-called “sanctuary” cities.

"The relocation program was funded by interest from federal COVID dollars and lawfully executed under an appropriation of the Florida state legislature (that, incidentally, had bipartisan support.) This program does not violate federal law. We will continue to defend the state’s actions against these politically motivated, unsound lawsuits," she said in an email.

The relocation program has forced the advocacy groups to divert resources from other programs to respond to an onslaught of requests for legal and other assistance from people “who are concerned about their and/or family members’ possible transportation out of Florida by state officials,” according to the lawsuit.

“This coordinated national system of tracking and processing noncitizens in proceedings before (the Department of Homeland Services) or the Immigration Court is upended and thrown into chaos when individuals who are required to appear before a federal agency in one location are unable to do so due to state intervention,” the plaintiffs’ lawyers wrote. “Thus, defendants interfere with the regular enforcement of immigration law when they transport someone out of Florida.”

The “interference is uniquely egregious” because the state transportation department and its contractors are “ill-equipped to determine” who has the legal authority to remain in the country, the lawsuit said. “The federal power to determine immigration policy is well settled and federal governance of immigration and noncitizen status is extensive and complex.”

“Though dressed as a state budget item,” the program “is an effort to backhandedly control national immigration, and, as such, it is unconstitutional,” the complaint said.