Florida Gov. Ron DeSantis implies Derek Chauvin is only guilty because jury feared 'what a mob may do'

During an appearance on Fox News' Ingraham Angle, DeSantis suggested to the host that jurors were afraid of the outcome should they not convict Chauvin. 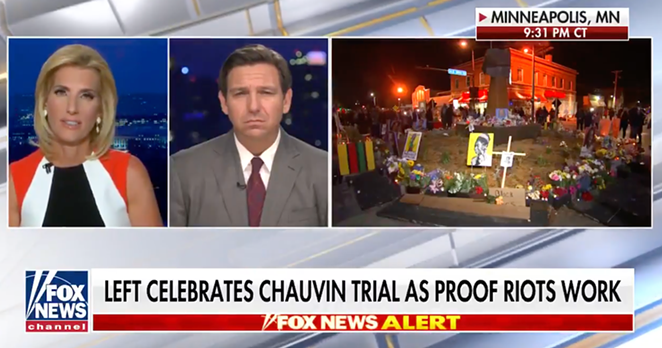 The murder of George Floyd by former Minneapolis police officer Derek Chauvin was blatant and obvious enough that it sent half the country into the streets for months at a time. A bystander captured footage of Chauvin kneeling Floyd's neck until he was dead. A jury, faced with this video, voted to convict Chauvin of murder. But Florida governor Ron DeSantis doesn't believe they were acting on what their own eyes showed them.

During an appearance on Fox News' Ingraham Angle, DeSantis suggested to the host that jurors were afraid of the outcome should they not convict Chauvin. (To which we say "good." Fear of nationwide unrest is apparently what it takes to convict one murderous cop. That's an impossibly high bar to clear, but Chauvin taking a man's life on camera was obvious enough to sail over it.) DeSantis worried that jurors might be too rattled to carry on the long-standing practice of letting police do whatever the hell they want.

.@GovRonDeSantis: Scaring a jury 'completely antithetical' to the rule of law. pic.twitter.com/6yyMFaRuUI


“That’s really, really troubling, Laura, because if that’s what a lot of people think, and I don’t know what happened with this verdict, but if that’s something that can potentially happen, where you basically have justice made meted out because the jury is scared of what a mob may do," he said.

DeSantis is a big-time advocate for consequence-free state violence. He just passed his pet project bill that makes it a felony to be caught at a protest police deem a riot. The supposed small gov conservative bragged to Ingraham about the way the bill supercedes local control of the police force, essentially making it against the law to defund problem departments.

A day after signing a bill that stripped Floridians of their First Amendment rights, with a threat of over a decade in prison for those ruled out of line, DeSantis called the potential for violence "completely antithetical to the rule of law."

Lake County rep Anthony Sabatini clearly shares this viewpoint. After the verdict was read, he tweeted out  "mob justice." That seems like a weird way to characterize being tried by a jury, especially when held up to the execution without trial that Chauvin carried out.