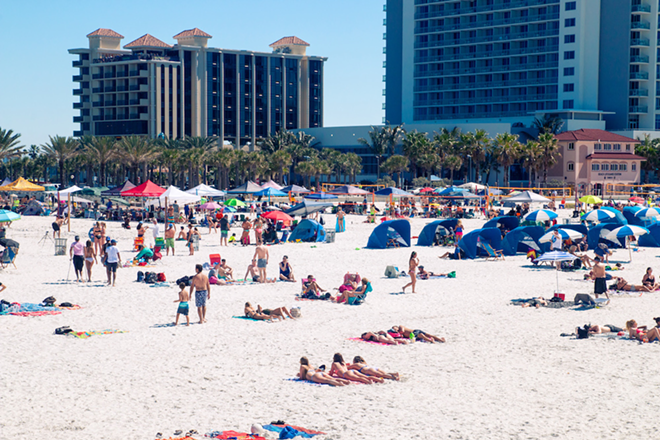 Saying he lacked the authority to second-guess Gov. Ron DeSantis, a circuit judge on Tuesday dismissed a lawsuit seeking to force the governor to close beaches throughout Florida.

“I believe that what I’m being asked to do is substitute my judgment for that of the governor on how to respond to this COVID crisis, which has been somewhat of a moving target,” Carroll said during a telephonic hearing Tuesday afternoon. “There are 599 circuit judges in Florida at last count, and I don’t think we need to have 599 governors-in-waiting.”

Carroll said that “second-guessing” DeSantis’ actions about beach closures and stay-at-home orders would violate separation-of-powers restrictions established by the Constitution.

But the judge also encouraged Uhlfelder to pursue an appeal in the case, “because I do think this is a matter of importance.”

“If the 1st District (Court of Appeal) tells me that I’m wrong and I do have the authority, then I’m glad to address it and go from there. But I do not believe that I have the power to do what you’re asking me to do, and I’m sorry to tell you that the answer is no,” the judge said.

“We’re not going to give up,” Uhlfelder replied.

Uhlfelder had argued that groups of beachgoers posed a threat to him and other Walton County residents.

The Panhandle attorney’s lawsuit came amid a fierce debate about whether beaches --- including those crowded by college students on spring break --- have worsened the spread of COVID-19.

“Our case is based on Gov. Desantis’ abdication of his constitutional responsibility to take affirmative steps to protect the health and safety of Floridians, including myself, in the face of COVID-19 spread,” Uhlfelder said during Tuesday’s hearing.

But Nicholas Primrose, DeSantis’ deputy general counsel, argued that Uhlfelder lacked standing to file the lawsuit because no one is forcing him to leave his house.

“He can’t show the injury because he’s not actually required right now to go to the beach or leave his home,” Primrose said.

But Uhlfelder said the injury is the risk of infection, which increases as the number of cases of COVID-19 continues to escalate throughout the state.

“I’m sure that Gov. DeSantis is not suggesting that in order for me to have standing to sue him … that I actually have to become infected,” he said.

The danger posed by the virus has been significant enough for the governor to issue numerous executive orders aimed at protecting the public, Uhlfelder argued.

“This is about our fundamental right to enjoy life and protect life and the welfare of our citizens,” he added.

But Primrose called Uhlfelder’s request for an injunction ordering statewide closure of beaches “a textbook example” of the separation-of-powers doctrine.

Carroll said he would not rule on the standing issue but agreed the court could not tell the governor how to handle the pandemic.

“Any order I would do on this would be a mere substitution of my preferences for his. And I don’t think courts should usurp the authority of the executive, whether we like what the executive has done or not,” he said.

The judge also expressed empathy for DeSantis and Uhlfelder.

In a telephone interview following the hearing, Uhlfelder told The News Service of Florida he intends to appeal the judge’s decision.

“This is a matter of life and death, and I think the governor needs to protect people’s lives and he’s not doing it. That’s why I started this, and we’re going to keep going,” he said.