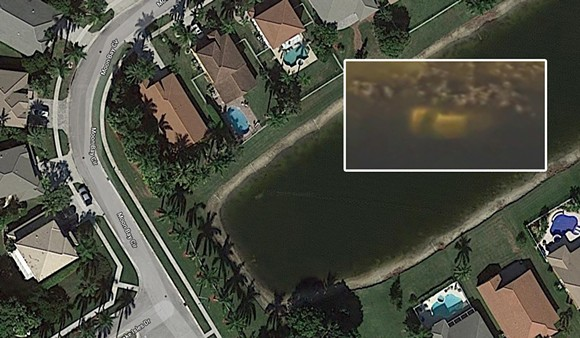 A Florida man's Google search of his former home led to the gruesome discovery of a missing person's car and body in a retention pond behind the house.

The Grand Isles man, Brian Martin, was searching his old neighborhood when he spotted a light-colored object in the water behind his old house. He contacted the new owners to ask if they knew about the object, which led to them sending out up drone to inspect it.

That led to a call to police.

According to WPTV, deputies responded to the call on Moon Bay Cir. on Aug. 28 at approximately 6:30 p.m. and towed the vehicle from the water.

Inside the car, which is still visible on Google Maps, were the 22-year-old skeletal remains of William Earl Moldt, who was last seen on Nov. 7, 1997, and was reported missing the next day.

Moldt was 40 when he disappeared and would be 62 years old today. He was believed to have had several drinks before leaving an adult nightclub on the night he disappeared.

A previous resident living in Grand Isles was doing a “google search” on google earth, in the area and noticed what appeared to be a vehicle in the pond behind a residence.

The vehicle’s exterior was heavily calcified and was obviously in the water for a significant amount of time. Upon removing the vehicle skeleton remains were found inside.Detectives and Crime Scene responded and assumed the investigation. The vehicle and the remains were towed to the Medical Examiner's Office for processing.On September 10, 2019, the remains were positively identified as William Moldt, who was reported missing on November 8, 1997.

Follow @cl_tampabay on Twitter to get the most up-to-date news + views. Subscribe to our newsletter, too.
Scroll to read more Florida News articles
Join the Creative Loafing Tampa Bay Press Club