And that's how you get your guns taken away, kids. 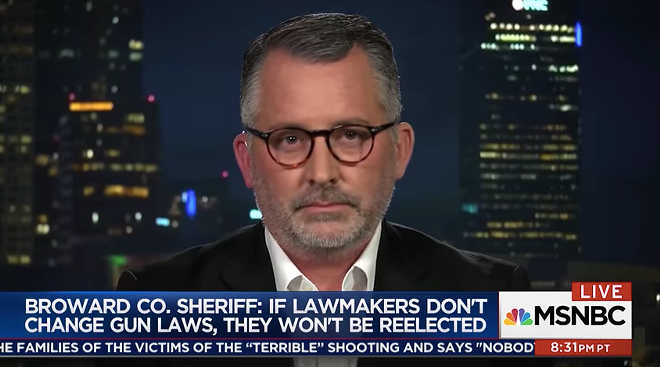 A 56-year-old Clearwater man was arrested Friday after it was discovered he tweeted a call to "shoot David jolly shoot him ba a American [sic] shoot him." Hoo, boy.

The Tampa Bay Times reported on the arrest Tuesday morning.

The tweet's author, 55-year-old Gerald McGuire (who goes by the handle @costaricancreat), appears to exist on a plane in which the conventions of grammar and syntax do not apply. Nor do laws barring threats of bodily harm.

McGuire's bizarre and disturbing tweet targeted Jolly, a Republican former congressman turned cable news voice of reason, for his views on the Second Amendment and one Donald J. Trump.

Since a gunman killed 17 at a Parkland high school earlier this month, Jolly has said that the only way to get sensible gun legislation passed is to kick Republicans out of Congress.

He was arrested Feb. 23 and charged with written threats to do bodily harm, a felony, and forced to surrender his firearms.

The tweet in question appears to have since been deleted, but the folks over at the Tampa Bay Times posted a screen grab of the tweet along with their original story.

McGuire's Twitter feed is still, however, loaded with gems. The Church of Scientology appears to be a big target of his ...er... social media activity (mostly slur-ridden strings of words containing wild if barely understandable accusations) and retweets of links to videos calling the likes of former White House Chief Strategist Steve Bannon a "cuck."