'If you see a manatee mating herd, observe respectfully from a distance. Do NOT touch.' 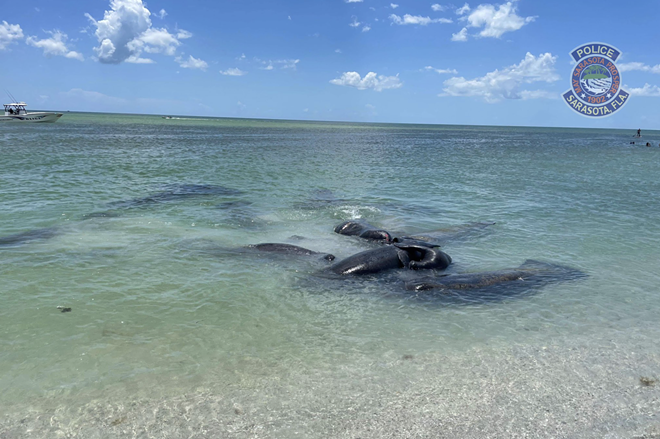 It's officially manatee mating season in Florida, and local officials are asking people not to put body parts near or within what's referred to as a "mating herd," or more disturbingly, a "mating ball."

On Sunday afternoon, a social media post from the Sarasota Police Department (SPD) stated that some lookie-loos were also attempting to "touch" a group of mating manatees near South Lido Beach.

"We spotted manatees mating near South Lido Beach Sunday. Folks were trying to touch them. Please don’t," said SPD. "If you see a manatee mating herd, observe respectfully from a distance. Do NOT touch."


We spotted manatees mating near South Lido Beach Sunday. Folks were trying to touch them. Please don’t. @MoteMarineLab: If you see a manatee mating herd, observe respectfully from a distance. Do NOT touch. If you see a distressed/deceased manatee, call Mote’s hotline 888-345-2335 pic.twitter.com/UI5jMcNzrY

This an important reminder, especially since manatees are currently listed as "vulnerable" under the Endangered Species Act, and it is actually illegal to touch, annoy, harass, or molest a manatee.

Not only that, but now more than ever manatees absolutely need undisturbed mom and dad time. Officials estimate there are roughly 6,000 manatees in the Sunshine State, and last year a record 1,101 died, which is an incredibly grim stat that nearly doubles the death rate from 2020.

Just remember, as the water temperatures rise, so does manatee libido. According to the Florida Fish and Wildlife Conservation Commission, this means manatee mating season typically runs from March to November.

So, this summer please don't stick anything in a mating ball.

SPD says if you do come across a distressed or deceased manatee, call Mote Aquarium's hotline at 888-345-2335.