The theme park says this generation of captive orcas is the last. Skeptics want a law. 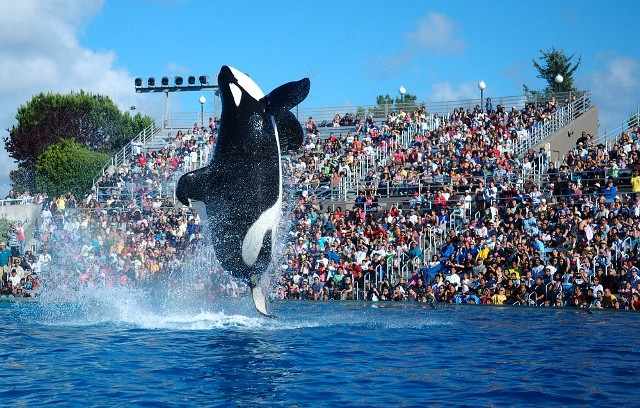 When ranking icons of Florida tourism, Shamu the killer whale is right up there with Mickey Mouse and Snooty the manatee (R.I.P. Snooty).

Since opening in 1973, SeaWorld Orlando has attracted hundreds of millions of visitors whose sole vacation mission is to see that orca shoot through the air, wave its flippers and plunge back down into the clear pool, splashing an unsuspecting grandma.

But those days are coming to an end.

Fresh off a legislative win in California, a coalition of animal rights advocates want Florida lawmakers to pass a law ending orca captivity, breeding and transporting. If adopted, the six orcas currently residing at SeaWorld Orlando would be “grandfathered” in. When they die, SeaWorld would be orca-less. The proposed bill also bans theatrical shows by captive orcas.

But will Floridians accept a SeaWorld without Shamu?

The event, “Change in the Right Direction: Protecting Florida’s Orcas,” was presented by the Animal Legal Defense Fund and John Hargrove, a former SeaWorld trainer turned activist turned author, whom you might recognize from scandal-spawning documentary Blackfish.

Hargrove is probably the last person SeaWorld wanted to become an outspoken critic. He’s charismatic, speaks warmly and intelligently (well, usually) and, most of all, has years of experience working with orcas and management. For more than 10 years, he had one of the coolest jobs in the world, a profession children could only dream about.

At one time, a 6-year-old Hargrove dreamed about it, too, after first visiting SeaWorld Orlando and watching the animals perform in Shamu Stadium.

“I was completely seduced by the entire environment,” he recalls. “The huge stadium. All the people. I loved the water. I love animals. …I decided then I would become a trainer. And I never went off that path.”

Courtesy of John Hargrove
“Your entire life has been built on this identity and you think you’re abandoning the whales," Hargrove says about his conflicted decision leaving SeaWorld. "Then you have to deal with your own guilt."

At 20, SeaWorld hired Hargrove as an apprentice at the park’s Texas location. He climbed the ranks to become a senior trainer, eventually transferring to California. He left the company in 2001 and worked with orcas at Marineland in France for a few years. After a five-year hiatus from training, he returned to SeaWorld San Antonio in 2008.

That’s when the dream job became a nightmare.

First, in December 2009, an orca on loan from SeaWorld killed a trainer at zoo in Spain. Then, in February 2010, an orca named Tillikum grabbed trainer Dawn Brancheau by her ponytail and pulled her into the water. As recounted in Blackfish, her death was the third such incident involving that whale.

“In the early years, you don’t exactly know what’s healthy or not, what’s right or wrong,” he says. “First, it’s questions. Then the questions turn into the realization: This is not right, this is not healthy.”

“It was just destroying these animals,” he continues. “I foolishly thought for a long time I could change it. You get very blinded by that love for the whales. Almost like you’re in a bad relationship. You’re invested in the love and you start to rationalize things away.”

SeaWorld Orlando did not respond to phone calls and e-mails requesting comment; however, past statements deny orca calves are prematurely separated from their mothers. The company has repeatedly denied Hargrove’s allegations of orca mistreatment and has attacked his credibility, including the release of an 8-year-old video showing a drunken Hargrove joking on the phone with a friend and using racial slurs.

“I don’t try to make any type of excuses for it,” he says of the secretly taped video. “Even if SeaWorld wouldn’t have released it and it stayed among friends, it was still wrong.”

Eventually, after years of fighting with management, Hargrove realized SeaWorld did not plan on changing its practices and resigned in 2012. A week later, the producers of Blackfish interviewed him.

SeaWorld always had to defend itself against animal rights groups like the People for the Ethical Treatment of Animals, but Blackfish brought the $2 billion corporation to its knees.

Attendance plummeted; stocks nose-dived. The company still hasn’t recovered: Attendance at SeaWorld parks nationwide fell 6 percent in the first nine months of 2017 compared to last year, according to corporate documents. Revenue is down tens of millions of dollars.

A year after the documentary’s release, a Santa Monica assemblyman Richard Bloom introduced the Orca Welfare & Safety Act to end the display and breeding of the animals. The bill initially stalled but the lawmaker tried again last year. After Before it passed by a wide margin, SeaWorld announced the company would voluntarily end the breeding program and phase out performances by 2019 at all of its properties.

So, why is there the need for a law in Florida?

The Florida law would essentially mirror the one passed in California, Larris says. Problem is, they have not found a legislator to sponsor it.

“Nobody has actually agreed to yet,” admits Larris. “Not because they don’t want to. The only pushback has been their list of priorities.”

Florida state representatives can only file six bills in a session, so finding room for killer whales between tax breaks and educational initiatives can be tricky. (Of course, that has never stopped some legislators from proposing utterly ridiculous laws.)

And as Larris travels across the state talking to stakeholders, she confesses, “Florida is in a very different political climate than California.”

Rep. Thad Altman, a Republican from Indialantic, seemingly withdrew his support for a captive breeding ban over the summer and blamed his staff for erroneously sending a letter backing the bill, Politico reported.

Larris has found allies in the state, though, including state representative Ben Diamond, a Democrat serving St. Petersburg. Before Thursday’s event, she met with the representative to discuss the latest draft of the bill.

“I think it’s an issue that warrants some study and a great deal of thought by our legislature,” Diamond told CL. “I haven’t committed yet to file this bill, but I’m studying it.”

SeaWorld also has deep pockets and lobbyists at a capitol obsessed with tourism. Larris says she thinks attendance might actually increase if visitors don’t have to feel guilty for visiting the park. That would be good news for visitor bureaus, who hold some clout in the legislature. (Representatives from Visit Florida and Visit Orlando did not return requests for comment.)

Ultimately, the tide of public opinion — what swayed SeaWorld to enact its own policies — will decide the fate of the last generation of orcas.

“I understand why the public wants to see them up close,” says Hargrove. “You see them in a show and you are just in awe. But what people don’t understand is the price they pay for being there.”