Florida has the fifth-largest number in the country, trailing New York, Texas, California and New Jersey. 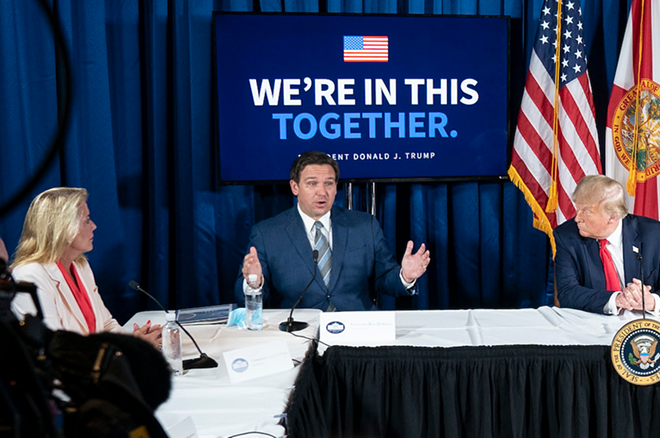 With 164 deaths reported Thursday, Florida passed another disturbing milestone: More than 15,000 residents have died of COVID-19.

Here are five takeaways about deaths that have touched families and communities throughout the state, from massive Miami-Dade County to sparsely populated Liberty County:

--- THE BIG NUMBERS: COVID-19 deaths started as a trickle in mid-March. But as of Thursday, less than seven months later, the number of reported deaths of Florida residents had reached 15,068. Also, 186 non-residents had died. The numbers of people who have succumbed to the respiratory illness are probably larger, as a lag has existed in reporting deaths. The United States has had more than 212,000 COVID-19 deaths, and Florida has the fifth-largest number in the country, trailing New York, Texas, California and New Jersey, according to Johns Hopkins University statistics.

--- THE CRUELEST MONTHS: Florida in the spring saw a steady increase in resident deaths, with the total going from 87 at the beginning of April to 1,314 at the beginning of May and 2,460 at the beginning of June, according to Florida Department of Health statistics. But as the state saw a surge of cases in the summer, the numbers of deaths soared in July and August. On July 1, the state reported a total of 3,550 resident deaths. By Aug. 1, that number had nearly doubled to 7,022. And by Sept. 1, it was up to 11,374. While the pace has slowed somewhat, the number of deaths increased by 3,070 from Sept. 1 to Oct. 1 --- or roughly 100 deaths a day.

--- AGE MATTERS: About half of COVID-19 cases have come in three age groups: 15 to 24, 25 to 34 and 35 to 44. But people in those age groups have accounted for only 386 deaths, or about 2.6 percent of the Florida resident total. Contrast that with people in the age groups of 65 to 74, 75 to 84 and 85 or older. People in those age groups account for about 15 percent of COVID-19 cases. But with the virus attacking seniors and people with underlying medical conditions, those older age groups account for 12,400 of the Florida resident deaths, or 82.3 percent.

--- LOCATION, LOCATION, LOCATION: Throughout the pandemic, Miami-Dade, Broward and Palm Beach counties have been the biggest hot spots for COVID-19 cases. So it is probably little surprise that they also have seen the most Florida resident deaths: 3,387 in Miami-Dade, 1,443 in Broward and 1,416 in Palm Beach, combining for more than 41 percent of the deaths statewide. But COVID-19 deaths have appeared in every county in the state, big and small. Neighboring Pinellas and Hillsborough counties, for example, have combined for 1,461 deaths. Neighboring Lee and Collier counties have combined for 711. And in rural Northwest Florida, neighboring Liberty and Franklin counties have combined for 12.