Florida Rep. Matt Gaetz can't go a State of The Union without doing something dumb

Last night Gaetz filed an ethics complaint against House Speaker Nancy Pelosi for ripping up the president’s State of The Union speech. 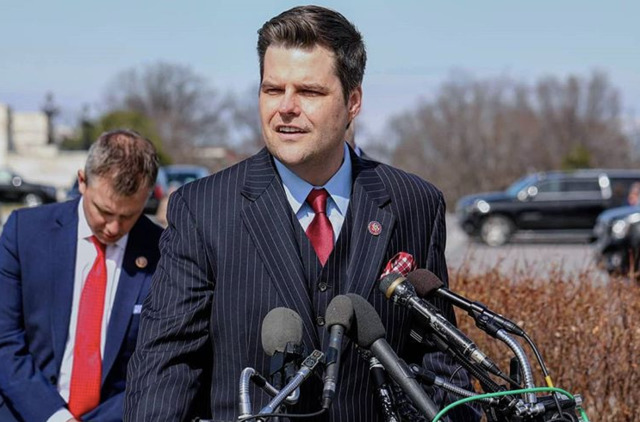 Matt Gaetz, a Florida congressman whose head probably wouldn’t fit in the Snickers hole, has a well-documented history of making a complete mockery of the State of The Union, which includes the time he brought a known Holocaust-denier as his plus-one, and when he snapped a selfie with Trump like he just met Kevin Hart at the Nickelodeon Kid’s Choice Awards.

All this is to say it’s not that surprising that last night Gaetz decided to file an ethics complaint against House Speaker Nancy Pelosi for ripping up a copy of President Trump's State of The Union address on live television.

“There is no question that Speaker Pelosi ‘mutilated, obliterated, or destroyed’ the copy of the President’s address provided to her,” said Gaetz’s signed letter to the House Ethics Committee. “The video evidence is clear and abundant, and the Speaker herself told reporters that she tore up the document.”

“Nobody is above the law,” declared Gaetz in a tweet linking to the letter.

BREAKING: I'm filing an ethics complaint against @SpeakerPelosi for destroying @realDonaldTrump's State of the Union speech.

Her conduct was beneath the dignity of the House, and a potential violation of law (18 USC 2071).

Nobody is above the law. She must be held accountable. pic.twitter.com/dXPPWQNtI8


The problem with Gaetz's passionate ethics complaint is that a copy of Trump’s speech is not an official document, which is why Pelosi’s chief of staff Drew Hammill called it “a frivolous stunt from a Congressman desperate to get back in the President’s good graces after he voted with Democrats and against the President on Iran” in a statement Thursday morning to the Washington Post.

It's tough to argue with Hammill’s point here.

Gaetz’s whole persona and political platform is based on being a die-hard, bullish Trump supporter. That's it. This was evident last month, when Trump was reportedly mad at Gaetz and he had to resort to tweeting about less exciting things like social security and commemorative coins, rather than posting an endless feed of clips showing himself on Fox News paying respects to the president and his big beautiful brain.

Obviously, the GOP’s argument here is that Pelosi somehow disrespected the tradition and decorum of the State of The Union, never mind that Trump refused to shake her hand at the beginning of the speech, or that his speech was jam-packed with easily debunked lies and xenophobic attacks on immigrants, among other things.

This is all just faux outrage, and it's terribly exhausting. Former Florida Attorney General and Tampa resident Pam Bondi, who is now part of Trump's legal council, even went as far as arguing that Pelosi somehow ripped up a "a 21-week-old baby" and a "Tuskegee airman" when she had the audacity to shred some paper. This seems to be the first baby not in a womb that Republicans care about.

Where did Gaetz get this horribly stupid idea that a piece of pulp from a Xerox machine is an official document? We’re not sure, but it’s probably because Charlie Kirk, the Turning Point USA founder whose club "owns the libs" by wearing diapers, tweeted this idea shortly after Pelosi ripped up the speech.

So, was it wrong for Pelosi to rip up Trump’s speech? Yes. Clearly a more respectful thing to do would’ve been to wad it up into a little ball and "Kobe" it (R.I.P.) into a nearby wastebasket.