The congressman comes to the aid of a Central Florida shitposter. 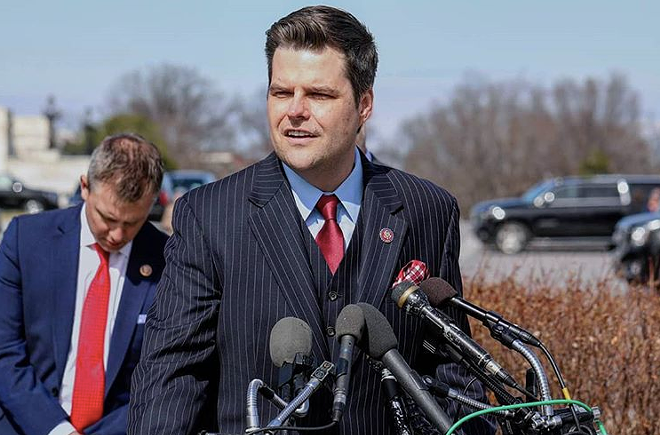 U.S. Rep. Matt Gaetz, who has an incredibly long history of posting wildly stupid conspiracy theories and racist posts to Twitter, is now calling out the social media platform after they suspended a far right blogger for posting anti-Islamic hate speech.

In a tweet sent Tuesday afternoon, Florida's 1st District congressman criticized Twitter for suspending the account belonging to Jacob Engels, publisher of the Central Florida Post, a close assistant of former Trump advisor Roger Stone, an InfoWars contributor, and all but admitted member of the extremist Proud Boys group, which the Southern Poverty Law Center has described as a "hate group," though the group says they're not.

Despite consistently wearing the black and yellow collared shirts, attending meetings, and referring to himself as a member in his own articles, Jacobs still claims he's not really a Proud By, but he's just embedded in the "Western Chauvinist" group as a reporter. "It is very dangerous to have @Twitter kicking people off the platform because they don’t like their speech. This is a slippery slope. #FreeJacob", tweeted Gaetz, while linking to a Big League Politics article.

It is very dangerous to have @Twitter kicking people off the platform because they don’t like their speech. This is a slippery slope. #FreeJacob https://t.co/O1qNZoLy7D

Engels, who had his Facebook account suspended last November along with every other account associated with the Proud Boys, was suspended from Twitter on Sunday, February 22, after posting blatant misinformation regarding Minnesota Rep. Ilhan Omar and arguing that her policies will somehow result in "roaming rape gangs." America’s future thanks to @IlhanMN. Roaming rape gangs… cops do nothing. Massive terrorist attacks. Old guy preaching about Jesus Christ is ‘breaching the peace’ and swiftly arrested. #LauraLoomer warned us. @JacobAWohl/@Ali/Laura are working to stop this in America!,” tweeted Engels. Engels has since responded to the suspension by posting to his Instagram account that he will "light the biggest fire the North has ever seen."

Ironically, Engels has also been featured on the Southern Poverty Law Center's "Hate Watch," for what he stated was simply "standing against forced female genital mutilation and attacks on women/LGBT from Radical Islam."

Gaetz's support of Engels shouldn't come as much of a surprise to anyone. The congressman has said in the past that he believes conservatives are victims of the hilariously dumb "shadow ban" conspiracy theory. But more importantly, Gaetz is a close associate of Engels' mentor Roger Stone, who has admitted to enlisting the support of the Florida chapter of Proud Boys to handle his social media accounts.

According to the Miami New Times, last week in a Washington, D.C. courtroom Stone named Engels and three other Proud Boy members — Tyler Ziolkowski, AKA Tyler Whyte, and Enrique Tarrio and Ray Perez — as "volunteers" who have access to his phone and his social media accounts.  Similar to Engels, Gaetz also has a record of highly questionable Islamophobic posts. Last October the congressman penned an absolute trash heap of a tweet, arguing that the brutally murdered journalist  Jamal Khashoggi isn't a U.S. citizen, and therefore, you know, what's the big deal about him getting dismembered and shoved into a suitcase.