Florida Sen. Marco Rubio wants us to be mad at Raphael Warnock for quoting ... Jesus 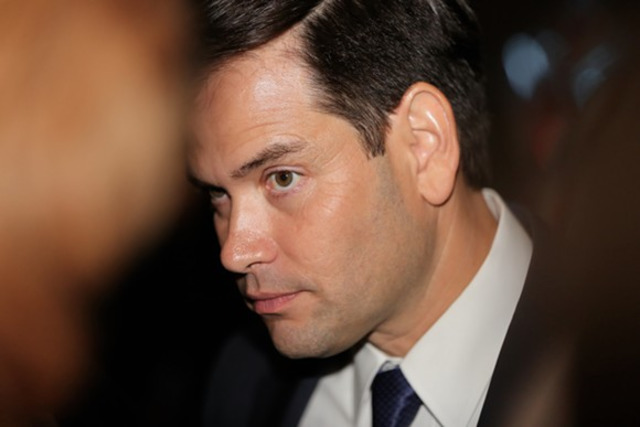 Marco Rubio, a sentient inflatable tube man shaped like a U.S. Senator, has inserted himself into Georgia’s U.S. Senate runoff elections over the last week, and this morning he attempted to drum up controversy by criticizing Democratic candidate Raphael Warnock for quoting Jesus.

On Wednesday morning, the Florida Republican tweeted a clip of Warnock, who has been a senior pastor of Ebenezer Baptist Church in Atlanta since 2005, criticizing the Democrat for his radical stance of, you know, reading the Bible.

“Not shocked #Georgia Democrat Senate candidate Raphael Warnock said “You cannot serve God and the military” at the same time,” tweeted  Rubio. “These & even crazier things is what the radicals who control the Democratic party’s activist & small dollar donor base believe.”

Not shocked #Georgia Democrat Senate candidate Raphael Warnock said “You cannot serve God and the military” at the same time. These & even crazier things is what the radicals who control the Democratic party’s activist & small dollar donor base believehttps://t.co/bQyBuKLwjb


Rubio, who is known for posting daily Bible verses, seems to forget that Warnock is actually quoting the big man Jesus Christ himself.  As former national press secretary for the Democratic National Committee Hari Sevugan pointed out, the verse comes from the Sermon on the Mount, which is a common Christian concept about not serving two masters.

“No man can serve two masters: for either he will hate the one, and love the other; or else he will hold to the one, and despise the other, Ye cannot serve God and mammon.” —Matthew 6:24

To be clear, the point isn’t that you literally can’t serve in the military, it's that you can’t serve militarism and God, which apparently has made sense for thousands of years to every Christian except Marco Rubio.

This, of course, comes from a man whose entire existence on Twitter has been one incredible self own after another, like the time the Senator attempted to pay tribute to the late John Lewis by changing his Twitter avatar to a photo of Elijah Cummings, or when he thought a journalist was a Venezuelan dam, or who could forget the time he got shellacked by some teens at a CNN town hall and spent the next few days getting mad online and justifying being bought by the NRA.