Florida's annual python hunt starts today, and $10,000 is on the line

450 snake hunters have already signed up for the 10-day competition. 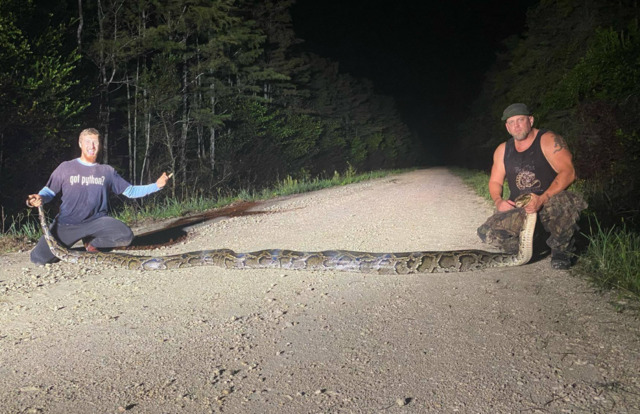 Photo via FWC
A record-breaking 18.9 foot long Burmese python was captured in the Everglades last October.

As Florida’s battle against the invasive Burmese python rages on, the state is offering $10,000 dollars to the hunter who can kill the most snakes this month.

The Florida Python Challenge begins today, and 450 snake hunters have already signed up for the 10 day competition, which takes place in the Florida Everglades.

In a press release, the organizations said the intent of the hunt is to get the public involved in fighting the pythons, and to increase awareness about invasive species, along with the threats they pose to Florida’s ecology.

“This Python Challenge is one of the more unique ways we are stepping up our efforts to battle these invasive pythons as well as engaging the public to help us in this fight,” said SFWMD Governing Board Member “Alligator Ron” Bergeron. “With the public’s help during this challenge, we can continue to make progress against these pythons and we can continue to make the Everglades a healthier ecosystem now and for future generations.”

Burmese pythons are not native to Florida and negatively impact native species. They are found mainly in and around the Everglades in South Florida where they prey on birds, mammals and other reptiles. They kill their prey by wrapping their victims and exerting around 6.23 pounds of pressure per square inch until they detect their prey’s heartbeat has stopped.

A female Burmese python can lay 50 to 100 eggs at a time. Since the python hunts began in 2000, more than 13,000 Burmese pythons have been removed from Florida.

Critics say the hunt does little to solve conservation problems, nor does it do much to help stop the invasive species.

Participants in both the professional and novice categories of the hunt can win prizes for removing the most and longest Burmese pythons. The $10,000 ultimate grand prize will be awarded to the hunter who kills the most pythons.

Those interested in competing can still register through the last day of the competition, July 18 at flpythonchallenge.org. There is a $25 registration fee and participants must complete a free online training to compete.

Last year, a record breaking 18-foot, 9-inch python was killed during a hunt.