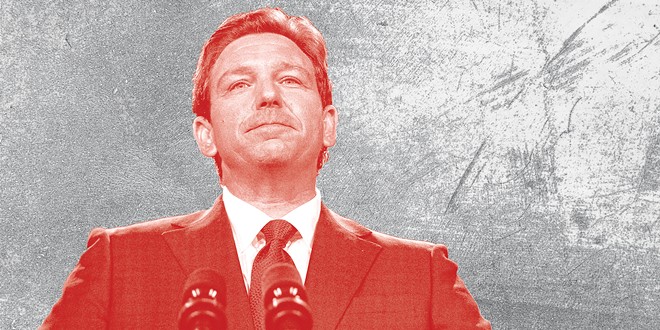 Photo by Dave Decker. Illustration by Jack Spatafora.
No one rode the anti-trans horse harder than Florida Gov. Ron DeSantis.
Welcome, friends, to our favorite time of year, when columnists hither and yon fill their allotted inches and/or pixels with retrospectives written well in advance, as we are relaxing with hearth and kin sipping cognac by the fire (more accurately, downing cheap bourbon while watching “Star Wars” before passing out alone on the couch) while you read this.

It wasn’t a surprise that five far-right members of the Supreme Court rejected 50 years of precedent to eliminate two generations of abortion rights. But it was still a shock—first, when Justice Samuel Alito’s draft opinion leaked, then when the ruling became official. Thirteen state abortion bans (or severe restrictions) went into effect, mostly in the South, criminalizing what had a few years ago been a routine medical procedure and none of anyone’s goddamn business.

Over the next two months, the number of legal abortions fell by 6%. Women with the means to do so traveled to obtain abortions. Others performed self-managed abortions or procured abortion pills from Mexico or Europe off the internet.

Congressional Democrats made noise about national legislation to protect abortion rights but failed to deliver. Republicans hinted at a national abortion ban the next time they have control of Washington. The Biden administration wrung its hands.

But if the far right thought women would meekly accept Alito’s smarmy, ahistorical paternalism, they were sorely mistaken. Voters in six states—California, Vermont, Michigan, Kansas, Kentucky, and Montana—backed abortion rights in referenda this year, everywhere the question was on the ballot.

In a wild turn for anyone old enough to remember the “safe, legal, rare” ’90s, Democrats made abortion access the centerpiece of their congressional campaign. And succeeded.

Until the returns came in, Republicans insisted a red wave was coming. Pundits and reporters took it as a given, not without cause. On a good day, President Biden’s approval ratings hovered around 40%. Inflation was over 8%. Historically, numbers like that doomed the president’s party in a midterm. Plus, generic polls showed that Republicans had a small but significant lead in generic-ballot questions, another indicator that the GOP was in for a good night.

And then the red wave turned into a puddle. Not everywhere, of course. Republicans exceeded expectations in New York and Florida, where the state Democratic Party somehow finds new definitions for the word “shambles.” But across the country, Republicans lost Senate and House districts they should have won, enough to keep Democrats in control of the Senate and give Republicans a very narrow margin in the House.

There’s no single factor that kept them at bay. Abortion was a big one. But perhaps biggest of all, though, was the cavalcade of incompetence, corruption, insanity, and assholery the GOP offered voters in its MAGA candidates: Blake Masters in Arizona, Mehmet Oz in Pennsylvania, Herschel Walker in Arizona, and so on.

Donald Trump ends the year weaker than he’s ever been.

Worst, his allies are abandoning him—not because of his crimes, but because he’s a loser. His endorsed candidates got crushed in November; his plan to triumphantly announce another presidential bid turned into a pathetic attempt to remain relevant. In polls, Republicans are ditching him for Florida Gov. Ron DeSantis.

It’s possible Trump isn’t finished. But with each passing day, it seems just as likely that his presidential campaign will coincide with a felony indictment.

Russia’s invasion of Ukraine had political ramifications all over the globe. Putin-friendly Republicans—cheered on by Glenn Greenwald and Tucker Carlson—criticized American and NATO efforts to arm the Ukrainian military. More importantly, the conflict and the international community’s sanctions drove up energy and food prices in the United States and Europe, stoking an already-burning inflationary fire.

Russia is also working with Iran to acquire drones it’s used to strike Ukrainian cities, a partnership of authoritarian American adversaries that have both taken aggressive measures to squelch dissent this year.

Adding to the tension was Russia’s arrest and conviction of WNBA star Brittney Griner on charges of carrying cannabis oil, for which she was sentenced to nine years. Earlier this month, the Biden administration traded Griner for Russian arms dealer Viktor Bout. But it could not secure the release of Paul Whelan, a former marine Russia has jailed for four years on espionage charges.

A year and a half ago, the big brains assumed that post-pandemic inflation was transitory. They were wrong.

As global economies rebounded, people had money to burn, but understaffed and overloaded global supply chains couldn’t keep up. As companies hired to meet demand, wages soared, and prices with them. (Corporate profits rose, too.)

Life became unaffordable. Annual inflation approached 9%, a number not seen since the 1970s. The Federal Reserve aggressively raised interest rates, and the stock market spiraled. But so far, the Fed has slowed inflation without triggering a recession. So far.

Republicans blamed President Biden’s Covid stimulus, though that was a small piece of a worldwide puzzle, and the U.S. has fared better than many Western countries.

Still, Biden’s polling took a hit from which he hasn’t recovered.

The remnants of President Joe Biden’s Build Back Better program got a Joe Manchin-approved name and squeaked through the Senate in August, giving the president a much-needed positive news cycle.

The IRA invested nearly $400 billion into clean energy through tax incentives, loan guarantees, and grants. It also extended enhanced Affordable Care Act subsidies for three years and lowered drug costs for Medicare recipients, while trimming $237 billion from the deficit over a decade. (Notice the word “inflation” anywhere in there?)

The IRA is not the Green New Deal. But combined with the CHIPS & Science Act, the Bipartisan Infrastructure Law, and the Covid relief law, it made Biden’s first two years among the most productive in modern history.

Rep. Liz Cheney lost her job and wrote the first line of her obituary.

Cheney is one of two Republicans on the House committee investigating the Jan. 6 insurrection. Throughout the year, she and her colleagues have laid bare Donald Trump’s plan to interfere in the certification of Biden’s election using absurd legal theories and ultimately incendiary shenanigans.

As of this writing—meaning, before your columnist signed off for the year—the committee was considering criminal referrals not just for Trump, but also for his chief of staff Mark Meadows, attorneys Rudy Giuliani and John Eastman, and former Department of Justice official Jeffrey Clark, who tried to make the DOJ an arm of Trump’s campaign in the administration’s waning months.

For Cheney’s disloyalty to Trump, congressional Republicans removed her from her leadership position, and Wyoming Republicans tossed her in the primary.

In November, a gunman murdered five people at a drag show in Colorado Springs. Weeks later, some yahoos shot out power transformers the night of a drag show in Southern Pines, North Carolina, that had been the subject of bible thumpers’ protests, casting the entire county into darkness. Doctors who treat transgender youth have faced death threats after being targeted by Libs of TikTok, Tucker Carlson, and other right-wing hatemongers. Republican legislatures have passed laws to prevent one or two trans girls from participating in scholastic sports.

No one rode this horse harder than Florida Gov. Ron DeSantis. His administration forbid using Medicaid to pay for gender-affirming health care and banned gender-affirming care for transgender teenagers. At his urging, the Florida Legislature passed the “Don’t Say Gay” bill, prohibiting teachers from discussing sexual orientation or gender identity “in a manner that is not age appropriate or developmentally appropriate for students.”

When Disney belatedly and half heartedly objected, DeSantis got his legislative sycophants to eliminate the Mouse’s special tax status, potentially costing neighboring counties billions of dollars. DeSantis’ press secretary said that anyone who opposed the bill was “probably a groomer.” She kept her job.

More than a dozen states have considered knock-off legislation.

Of course, the war against the woke went well beyond trans kids. Florida also passed the Individual Freedom Act, previously known as the Stop W.O.K.E. Act, which barred schools and colleges from teaching anything that might hurt white children’s feelings, and prohibited private companies from conducting diversity training. Calling the law “dystopian,” a federal judge has struck down the parts about higher education and businesses.

In a recent court hearing, DeSantis’ lawyer was asked to define the governor’s favorite epithet: Woke, his general counsel said, is “the belief there are systemic injustices in American society and the need to address them.” Definitely a threat to be stopped.

Speaking of threats: From January to August, the American Library Association tracked 681 attempts to ban or restrict access to more than 1,600 books and other library materials. Most of them featured characters of color who were LGBTQ.

Moving on to important legislation that shouldn’t be necessary: the Respect for Marriage Act, which formally repealed the 1996 Defense of Marriage Act and codified same-sex (and interracial) marriage rights in case the Supreme Court jettisons more precedent in service of its far-right agenda.

The impetus wasn’t just the court’s decision to overturn Roe v. Wade and Casey v. Planned Parenthood, in which five justices found that the 14th Amendment’s Due Process clause did not include the right to abortion, contrary to 49 years of case law. It was, more specifically, Justice Clarence Thomas’ concurring opinion.

“In future cases,” Thomas wrote, “we should reconsider all of this Court’s substantive due process precedents, including Griswold, Lawrence, and Obergefell.”

Griswold established the right to contraception access. Lawrence prohibited states from criminalizing same-sex relations. Obergefell legalized same-sex marriage. You can see why people might be nervous.

More than 190 Republicans voted against the Respect for Marriage Act.

On May 24, an 18-year-old fatally shot 19 students and two teachers, and injured 17 more, at Robb Elementary School in Uvalde, Tex., while hundreds of cops stood in the parking lot for more than an hour.

As of this writing, it’s one of 15 mass shootings this year that have produced five or more fatalities, not including the gunman: Ten dead in a Buffalo supermarket. Seven dead in an Oklahoma murder-suicide. Six killed in a Walmart shooting. Six people killed in a Fourth of July parade in Illinois. Five dead in a California gang shootout. And so on.

In June, Biden signed the first “major” gun legislation in decades. It provides states with money for crisis intervention programs, including red flag laws, and made modest improvements to background check laws. But it banned no guns—not even assault rifles.