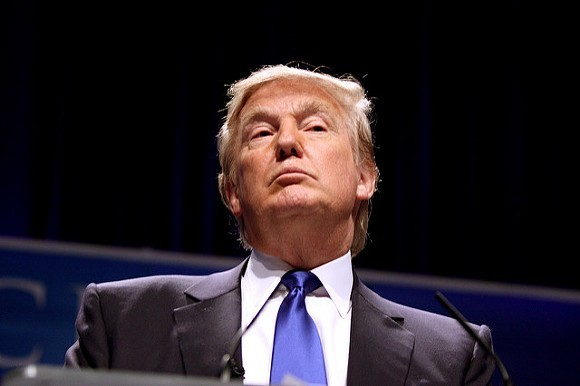 Photo via Gage Skidmore on Flickr
Donald Trump, who's been accused of assaulting yet another woman.

A former campaign staffer is suing President Donald Trump after alleging that he kissed her without consent before a Tampa rally in 2016, the Washington Post reports.

White House press secretary Sarah Sanders denied the allegation, calling it "absurd on its face." Former Florida Attorney General Pam Bondi, who's listed as a witness in the lawsuit, also told the Post she did not see the alleged kiss.

The former Trump presidential campaign staffer is Alva Johnson, an Alabama resident who was responsible for managing mobile officers known as "Trump RVs" that engaged voters in Florida. On Aug. 24, 2016, Trump met with volunteers and staff inside one of the trailers before a rally in Tampa, according to the lawsuit filed in the U.S. District Court for the Middle District of Florida.

Trump took pictures and autographed campaign signs, and Johnson says she noticed her boss was "watching her and appeared to be trying to make eye contact with her."

When it was time to leave for the rally, Trump passed Johnson. She told him she had been on the road since March, away from her family, and urged him to go in there and "kick ass." That's when Trump allegedly grasped her hand and would not let go, the lawsuit states.

"He told her he knew she had been on the road for a long time and that she had been doing a great job," the lawsuit alleges. "He also told Ms. Johnson that he would not forget about her, and that he was going to take care of her."

As Trump spoke, Johnson alleges he tightened his grip on her hand, moved in closer to her and tried to kiss her on the mouth. When Johnson realized Trump was attempting to kiss her, she turned her head, so Trump ended up kissing her on the corner of her mouth.

Johnson said she felt shocked, confused and humiliated by the incident. She also says that several high-level campaign staffers witnessed the incident, including Bondi and Karen Giorno, director of the Florida campaign.

Johnson alleges that after Trump kissed her, Bondi smiled and Giorno "grabbed Ms. Johnson’s elbow and gave it an approving tug," according to the lawsuit. Both Bondi and Giorno denied seeing the kiss to the Post and denied their alleged reactions, with Giorno saying the incident "absolutely did not happen."

But Johnson says by the time she got back to campaign headquarters in Sarasota that day, other staffers already knew about the kiss, with one staffer telling her she was "the Florida team’s secret weapon because [Trump] had kissed her."

Johnson continued working for the Trump campaign. Then on Oct. 7, 2016, she heard the Access Hollywood tape in which Trump, speaking about women, said, "You know I'm automatically attracted to beautiful – I just start kissing them. It's like a magnet. Just kiss. I don't even wait. And when you're a star, they let you do it. You can do anything. Grab 'em by the pussy. You can do anything."

"Ms. Johnson began to feel panicked, like she couldn't breathe, as she realized that what [Trump] had done to her was not an isolated incident, but part of a pattern of predatory behavior towards women," the lawsuit says. "She remembered how other staffers on the campaign had treated his improper behavior like a joke and a positive event. She felt disgusted and re-traumatized."

After quitting the campaign a few weeks after the tape was released, Johnson contacted an attorney and talked to a therapist. The attorney, however, did not end up taking her case, reportedly for "business reasons," according to the Post.

"She continued to feel considerable emotional distress because of the forced kiss, and had nightmares about it," the lawsuit alleges.

Johnson, who is African American, also alleges in her complaint that she was vastly underpaid compared to her white male counterparts. She's seeking an injunction prohibiting Trump from "grabbing, kissing or otherwise assaulting or harassing women without prior express consent," as well as unspecified damages.

This story originally appeared at orlandoweekly.com. Stay on top of Tampa Bay news and views. Sign up for our weekly newsletter.