A report by The Intercept tied money to Chinese foreign nationals. 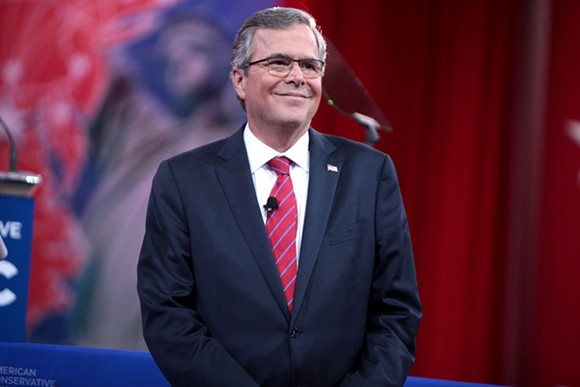 Photo by Gage Skidmore via Wikipedia

The fine comes after The Intercept reported that the PAC Right to Rise USA accepted $1.3 million in illegal donations from the Chinese-owned corporation American Pacific International Capital. Inc., or APIC. The report cites how Chinese businessmen illegally directed money to the political committee, which was formed in January 2015 to support Bush's failed 2016 Republican presidential primary run. The Campaign Legal Center, a nonprofit watchdog group, filed a formal complaint with the FEC after the Intercept's report published.

Bush, an early frontrunner in the race, nixed his control of the PAC in June 2015. Mike Murphy, a Republican political consultant, then took control. APIC — which is owned by two Chinese nationals, Gordon Tang and Huaidan Chen — sent $1 million and 300,000 donations to Right to Rise USA in 2015, the Intercept reported in August 2016.

Late last week, the FEC announced the nearly $400,000 fine against Bush's PAC, as well as $550,000 in penalties against APIC, ushering in the largest penalties issued by the FEC since the U.S. Supreme Court ruled on the controversial Citizens United case in 2010.