“The hatred of the police because of one horrible action by a guy in Minnesota just tarnishing everybody.” 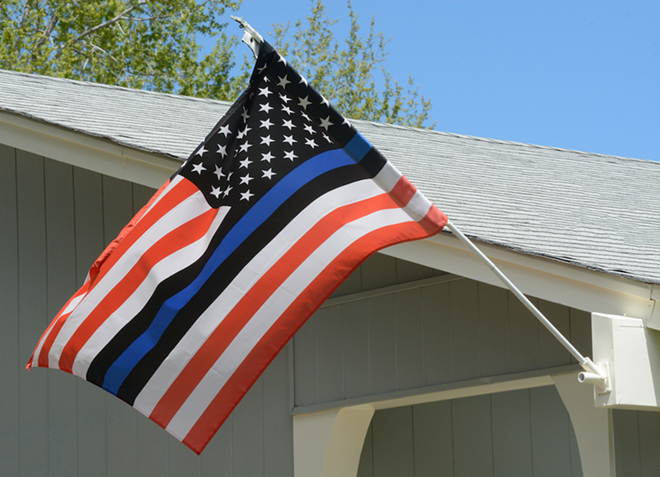 In the letter dated June 22, the Fox Wood Community Association wrote, “During a recent inspection it was noted that you have an improper flag displayed on your property. While we support your patriotism the American flag does need to be the traditional American flag.”

According to the letter, if the flag is not removed by July 6, “further action will be taken.”

In response, Kennedy told WFLA-Channel 8, “I’m not taking it down. It’s something I’ve worked for for 25 years and I believe in, so, and it’s definitely not racist, it’s definitely not hatred,” he said. “It’s a tribute to law enforcement officers and firefighters who died.”

Kennedy, who was an officer for 25 years, believes that he understands why he was asked to remove the flag.

“I think it’s self-explanatory what’s going on in the world,” he said to the station. “The hatred of the police because of one horrible action by a guy in Minnesota just tarnishing everybody.”

The flag has been a constant source of controversy over the past few years. Kennedy, like others, believes there is no malice behind the “Thin Blue Line” flag. Others cite the flag’s appearance in the hands of white supremacists at the 2017 ‘Unite the Right’ rally in Virginia to be proof otherwise.

Even police officials have recently banned the “Thin Blue Line” flag from being displayed by officers. In May, San Fransico Police Chief Bill Scott banned officers from wearing face masks embroidered with the flag because local residents may see the symbol as “divisive and disrespectful.”

In Tampa Bay, Sarasota County Sheriff’s Capt. Ryan Brown told his deputies that they're no longer allowed to wear the "Thin Blue Line" logo while on duty, citing  "uniformity," but did note that law enforcement is currently dealing with "unique times."