From Kriseman to Baker to Trump to FDP, diverse voices condemn violence in Charlottesville

The violence continued into Saturday ahead of a "Unite the Right" rally organized by white nationalists. 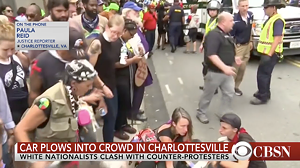 One person has been killed and several have been injured in the wake of a car plowing into a crowd of counter-protesters at a white nationalist rally in Charlottesville, Virginia. The incident followed hours of brawling that led Virginia Governor Terry McAuliffe to declare a state of emergency Saturday.

The violence stemmed from a "Unite the Right" gathering of white nationalists who were there to protest the possible removal of a Robert E. Lee statue from a public park. As white nationalists — many reportedly from out of town — gathered Friday evening and Saturday morning, so, too, did counter-protesters.

Here's a little flavor from the Friday evening installment of the event, per the New York Times:

Clashes between protesters and counter-protesters ensued.

As Saturday's violence ensued, those who blame President Donald Trump for white nationalists' newly found post-Obama voice and presence wondered whether he would condemn the events that have thus far unfolded.

And, in fact, he has. Check out his tweet:

Call me cynical, but this rings hollow from the guy who elevated white nationalists like Miller, Bannon and Gorka to top White House posts


A national network of black church leaders also condemned the violence in a written statement.

“We stand with communities like Charlottesville that are doing the correct and necessary thing to eliminate symbols of White supremacy and racial oppression from public places,” said Scott Reed, executive director of PICO National Network. “Communities that decide to take down statues that venerate racial oppressors and slave owners and rename institutions should not be intimidated by racists. As the nation's largest faith based networks we strongly support efforts by communities in Virginia and across the country to reckon with their racist past and reject racial intimidation in all its forms.”

"The events in Charlottesville are an attack on our American values," said FDP chair Stephen Bittell. "The Florida Democratic Party strongly condemns these recent acts of terror and violence. There is no room for hatred and bigotry in America. We are better than this, and we urge every elected official to speak out strongly and forcefully against this dangerous and unacceptable  conduct."

Leaders from the Muslim community, which is often under attack from white nationalists, weighed in as well.

“Islam teaches self-restraint as the best speech,” Nasim Rehmatullah, National Vice President of Ahmadiyya Muslim Community USA, said in a written statement. “This is a time for Americans to stand united against hate speech and embrace this Islamic principle of free speech based on civility and dialogue.”

Former Florida Governor Jeb Bush also spoke out against the events of August 11 and 12.

The white supremacists and their bigotry do not represent our great country. All Americans should condemn this vile hatred. #Charlottesville


Closer to home, the two best-known contenders in the St. Pete mayor's race, Rick Baker and Rick Kriseman, each condemned the events that have unfolded in Charlottesville.

Baker, a conservative former mayor of St. Petersburg, sent out a short-and-sweet tweet:

Racism has no place in America.


So, too, was Tampa Mayor Bob Buckhorn.

America's Mayors stand with Charlottesville Mayor @MikeSigner. No room for hate, bigotry and racism in our cities.