Pretty rich coming from a guy whose deputies don’t have body cams either. 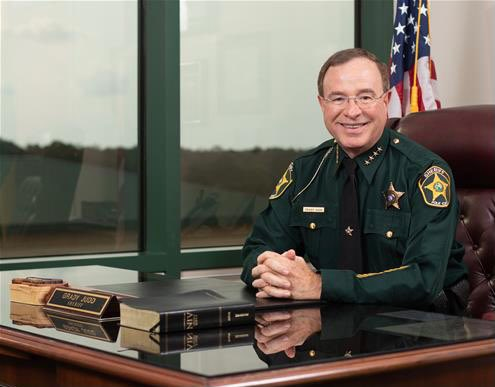 PolkCoSheriff /Twitter
The same sheriff’s office that refuses to wear body cameras despite a fatal May 2021 police shooting that led to community outcry for more oversight is pushing back on the idea of qualified immunity.

In a shock to no one, the Polk County Sheriff’s Office (PCSO) thinks the doctrine of qualified immunity—which can protect police officers from accountability for misconduct—should be kept in place.

That’s right. The same sheriff’s office that refuses to wear body cameras despite a fatal May 2021 police shooting that led to community outcry for more oversight is pushing back on the idea of qualified immunity.

And its leader isn’t afraid to rant about it in a way that seems to contradict the way the law actually works.

According to a press release sent by the PCSO and Sheriff Grady Judd, “Qualified immunity simply means that if a police officer is doing his or her job, following their police agency's policies, and following the law, the officer is not civilly liable in a federal civil rights case for their well-intended actions that were objectively reasonable.”

“The qualified immunity fake solution some in Congress are proposing does
nothing to change bad police culture or improve police conduct and community relations. Let’s focus on something that works - professional police accreditation.” - Sheriff Grady Juddhttps://t.co/4Hz8EDkp58 pic.twitter.com/ddE9HNsRo1

In the statement, Judd asks: “Do members of Congress understand that people already have access to state and federal courts to hold police officers accountable? Adding another opportunity for federal lawsuits is what I call the, ’Stuff the Lawyers' Pockets Act.’”

But in federal and state constitutional and civil rights cases that are affected by qualified immunity, lawyers are not working cases to stuff their pockets, but to pursue justice.

According to Cornell Law University, qualified immunity can help government officials like cops avoid going to court at all.

There’s a debate currently being waged in congress over whether or not to limit qualified immunity to only private civil cases against law enforcement officers, as part of the George Floyd Justice in Policing Act.

If the law were to pass in its current form, it would mean that qualified immunity would still apply to and defend officers being sued privately, once again contradicting Judd’s claim of overflowing lawyer’s pockets.

Congress is considering the change to the doctrine because, time and again, federal and state cases involving alleged police misconduct have been dropped by judges due to qualified immunity.

In a statement about a federal case against a police officer being dropped due to qualified immunity in September of 2020, the ACLU wrote, “Judges have invented a legal doctrine to protect law enforcement officers from having to face any consequences for wrongdoing. The doctrine is called ‘qualified immunity.’ In real life it operates like absolute immunity.”

The PCSO and Judd disagree, saying that equating police accountability with more lawsuits is “perverse,” and that it “blasts the door wide open” for more lawsuits, and will only bankrupt cities and counties and penalize taxpayers.

Judd, known for controversial antics like a Christmas video depicting inmates making bobblehead versions of himself, and a threatening Tweet to people fleeing a hurricane, says that more accountability will lead to more police officers leaving the profession and many others afraid to do their job.

“The result is evident: Crime, and specifically violent crime, will increase more than it has because of these attacks on all police agencies for the bad conduct of a very few,” Judd writes.

Judd says the real solution is to incentivize police agencies to become professionally accredited by state or nationally recognized professional accrediting bodies. He says that PCSO has received 10 state and national accreditations that include 1,487 best practice standards.

Still, in just the past year, the PCSO shows up multiple times in the news over controversial incidents. From the recent fatal police shooting and the community’s call for body cams, to officers arrested for tampering with evidence, to officers punching a cuffed man. In March, two PCSO officers were fired and charged with conspiring with an inmate to bring methamphetamine into a jail, among other charges.