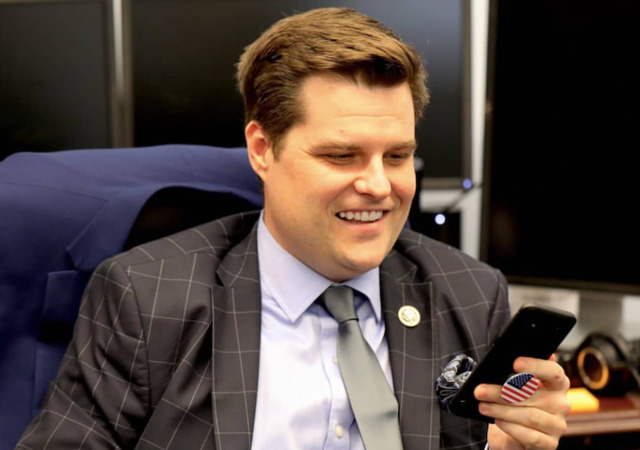 Eskamani shared the 27-second voicemail, which she says was sent on July, 4, 2019, with Creative Loafing Tampa Bay.

Here is the transcript:

Greenberg: “My dear Anna, this is your favorite tax collector. I’m up in the Panhandle with your favorite U.S. congressman Mr. Gaetz.

Greenberg: "And uh, we were just chatting about you and your lovely qualities, and your…”

Gaetz: “... We think you’re the future of the Democratic Party in Florida!”

Greenberg: "See, I know you’re the future of it, there's no thinking involved. Anyway, uh, if you get this and you feel like chatting, give me a shout back. Hope you’re well. Hope you had a nice Fourth, later."

You can listen to it below.

Eskamani, who is Iranian, says the voicemail was strange because Greenberg and her were not—and still aren’t—exactly on cordial speaking terms, since it followed her calling for him to resign in 2018 after he shared anti-Islamic posts to Facebook.

She also says the voicemail followed another uncomfortable situation, where he asked her to lunch and was presumably “high the entire time.”

“It was the weirdest meeting I’ve ever had,” added Eskamani.

“I haven’t shared any of this publicly because for so many women, feeling forced to have lunch with someone you don’t want to have lunch with or getting unsolicited gifts and phone calls is the norm. You internalize it and just try to avoid that person. I’m not doing that anymore,” said Eskamani in another tweet.

Besides being entirely creepy and inappropriate, the voicemail also shows the apparent close relationship between Greenberg and Gaetz.

On Thursday, the The New York Times reported that the two men met the same 17-year-old girl through the website Seeking Arrangement, and paid for sex using Apple Pay and CashApp.

According to the Daily Beast, federal investigators were first tipped off about Gaetz’s connection to Greenberg after they obtained text messages showing the former Tax Collector had brought the Republican congressman to his Lake Mary office on April 18, 2018 for an after hours visit that involved rifling through discarded IDs.

Earlier this week, the Times broke the story that Gaetz is being investigated for having a sexual relationship with a 17-year-old girl and violating laws against sex trafficking in the process. The story has since been confirmed by multiple outlets, and even Gaetz.

However, Gaetz denies any wrongdoing and has yet to be charged, even saying he’s actually the victim in a broader $25 million extortion scheme to free a prisoner in Iran in exchange for a pardon from President Joe Biden.

Greenberg has been charged with 33 felony counts accusing him of things like stalking a political opponent, using a state database to create fake IDs, and sex trafficking a minor between the ages of 14 and 17.