In the wake of CL’s reporting, several high profile leaders have pulled their endorsements of Smith. 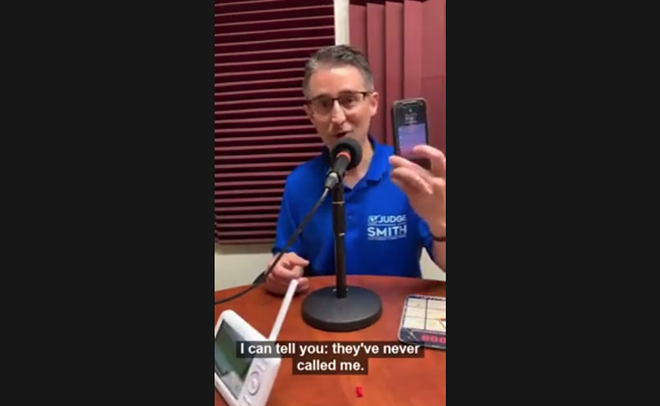 John Fox/YouTube (Screengrab by CL)
'None of the news media, before they published anything, contacted us,' Smith falsely claimed said.
Hillsborough Judge Jared Smith has issued a public apology to Creative Loafing Tampa Bay after he claimed that he had not been contacted by this paper before publishing stories about him.

Last Saturday, Smith—who is running for reelection against Nancy Jacobs in Group 37—took to the airwaves during WTMP 1150-AM’s “What’s Really Happening” show. During his appearance, Judge Smith referenced recent exposés by CL, along with La Gaceta’s articles about his campaign, and said the media didn’t try to get both sides of the story.

"None of the news media, before they published anything, contacted us," Smith said.

In comments captured on a YouTube video, Smith specifically named myself, along with La Gaceta Publisher Patrick Manteiga, during the radio segment. Smith claimed I wasn't telling the truth in stories that referenced using email and the phone in making several attempts to reach him. But Smith’s comments on the program were false.
Today, Judge Smith apologized via email:

“I, Jared Smith, take full responsibility for those emails not being reviewed, and I apologize to CL and Justin Garcia for missing those and making the generalized statement that, ‘None of the news media before they published anything contacted us.’ Although not intentional on my part, that was clearly not an accurate statement. I correct that at this time, and give full permission to Mr. Garcia to publish this apology and correction.”

Smith said that the reason he had not seen the emails from CL is because even though the email address “[email protected]” was listed as his contact on his official campaign website, his campaign was not checking that inbox for the past several weeks and he was not aware of them.

In his apology letter, Smith referenced me getting a hold of him on his cell phone, but disagreed over the exchange. “Mr. Garcia asserts on Twitter that I simply hung up on him, but I respectfully disagree,” Smith said.

He said he advised me that he would be unable to contact me prior to 8 p.m (more than three hours later) and that he had to go. But in his interview on WTMP he told the hosts that he had told me, “Hey I’ll call you right back I’m about to go into something.”

During our call, Smith did say he was busy, but only after I introduced myself. When I asked when he could talk, because I had a story coming out that day and I had already reached out via email hours before, he said maybe later on. But he said he wasn’t sure when, and that he really did have to go, and hung up. My editor also overheard this interaction. I never received a call back from Smith, even after the story’s publication.

Before the phone call, the aide who gave me Smith’s cell phone number also confirmed to me that his campaign had received my email inquiry earlier that day.
In his apology email, Smith said, “my cell phone number is listed on all of my business cards,” and requested that all future inquiries be made to his cell.

CL initially reported on Smith denying a 17-year-old an abortion based on her grades. That decision was overturned and led a higher panel of judges to rule that Smith had abused his judicial discretion. In that same story was a video of Smith's wife, with the judge standing next to her, saying that Smith's Jewish opponent, Nancy Jacobs, "needs Jesus" to a church full of people.

CL also reported on an illegal attack ad against Jacobs, which was published by a client of Smith’s but later removed after it underwent scrutiny for violating state law for not having an endorsement disclaimer. Experts said that if Smith was involved with the publication of the ad, it would violate Canon 7 of judicial ethics.

The social media group which ran the ad claimed that Smith was unaware of it. But just the week before the ad was published, Smith paid the group $1,000 under the purpose of “advertisement.”

In the wake of CL’s reporting, several high profile leaders, including Tampa’s City Councilchair, a Hillsborough County Public Defender, and a retired judge who served for 17 years all pulled their endorsements of Smith, leading up to the Aug. 23 election.

Just today, The Tampa Bay Times told CL that it stands by its recommendation of Smith over Jacobs.

I’m told that @HillsboroughFL Judge Jared Smith went on @WTMP_Tampa to tell lies about my reporting. He claimed that I didn’t make a decent effort to reach out to him for stories I wrote about him. His problem is that I have receipts. A thread…