How they roll: Ybor’s cigar industry may have faded, but its storefront biz thrives 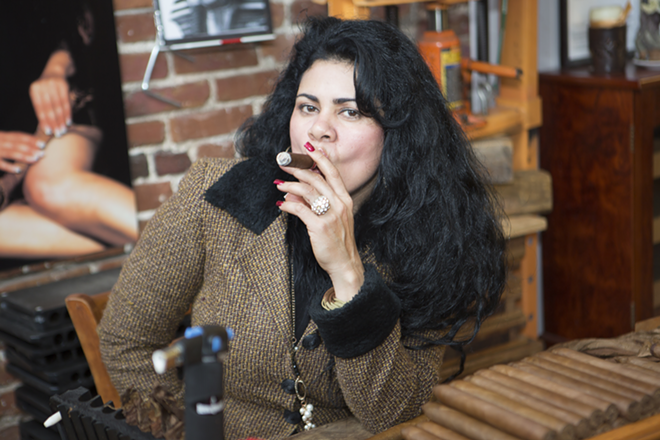 The long, burgundy-manicured fingernails on Odelma Matos’s hands belie the career in which she has been steeped for some 28 years, since she was 16. They do anything but suggest that she rolls some 150 cigars a day.

She is careful to scrub the tobacco residue from her hands so it doesn’t stain, she said, and the nails don’t really get in the way.

Matos operates La Faraona Cigars at 1517 East 7th Ave., a small storefront along a street that has become better known for its colorful bar scene than the industry that brought Ybor City to life about 130 years ago. Her shop, which like many cigar joints doubles as an espresso bar, is decorated with multiple photos — some of sprawling cigar factories in Cuba, some of Matos with her fans, a few celebrities among them.

Passersby in search of the next watering hole may see the handful of cigar rollers sitting at small wooden tables in small, dark storefronts along this strip — and the clientele puffing away and sipping Cuban coffee at the tables outside — and dismiss them as quaint relics of the Ybor City of a century ago, places frequented only by tourists and well-to-do white guys.

After all, even though Tampa still has managed to hold on to its “Cigar City” moniker over the years, only one large-scale cigar factory, 119-year-old J.C. Newman Cigar Company (the one with the clock tower), remains. At the industry’s height, some 150 cigar factories crowded Ybor City’s cobblestone streets. J.C. Newman employs just 130 people, who operate vintage cigar-rolling machines.

But cigar makers along 7th — whether or not they serve booze alongside their product — seem to be doing pretty well, joined in recent years by new stogie-oriented storefronts along the strip.

Don Barco, owner of King Corona Cigars, said the strip in the early 1990s was packed with cigar rollers — close to 15 — with some peddlers selling cigars out of carts they rolled down the sidewalk. The number of such shops plunged the following decade, but has since recovered; now there are nearly 10.

Still, the industry is minuscule compared to what it was.

Before the Great Depression, Ybor was nicknamed the cigar capital of the world. Its namesake, Vicente Martinez Ybor, emigrated to Cuba from Spain and launched a cigar factory in Havana. Social unrest and economic strain prompted him to move his operations to Key West, where water and labor shortages and a lack of transit ultimately drove him to Tampa.

For more than 40 years the industry boomed, but an unfortunate combination of factors spelled its demise around 1930, when the Great Depression and cigar-rolling machines combined to demolish much of the industry.

It’s unclear whether the industry will face challenges from increased competition as Cuba and U.S. relations continue to warm. Cuba, after all, is synonymous with cigars, and popular culture is full of references to the coveted cigars that originate there.
Barco’s not too worried.

“I think Cuba, when it opens up, there’s going to be that mystique thing at first; people are going to want to get their hands on Cuban cigars,” he said. “I think the majority of them are going to be mediocre because demand is going to be high and they’re not going to be able to meet demand. But after two, three, four years of crop seasons, and when they start to get an influx of money into their system, I think then you’re going to start seeing some good cigars come in.”

He said Cuba’s economic limitations have stymied the country’s ability to grow good tobacco, and manufacturing methods used there are obsolete. Nicaragua and the Dominican Republic, he said, offer better cigars, and they’re already on the market in the U.S.

An emigre from Cuba, Matos has been operating her shop just three years, though its atmosphere makes it seem like she’s been there for decades. In Cuba she spent years working at a large factory where she and her cohorts sat at tables in rows of 12. Some would spit on the uncut end of each cigar to make it easier to twist, which obviously wouldn’t fly in the states. She said she misses the camaraderie at that factory. Here, her son, who is in his early 20s, helps her roll.

In broken English and with the help of Sam Oxendine, one of her regulars, she recalled when a man wandered in at the advice of a visitors’ center. He asked her to roll him a cigar and tried to hand her a hundred-dollar bill. She wouldn’t accept the money — the cigar was gratis.

He said it was a tip. She declined again, at which point he asked her if she knew who he was. She wasn’t familiar with the name: Steven Spielberg.

Now she counts him among her products’ many fans.

Many of her sales are done online, though North Carolina-based Bull City Cigars is a big buyer of hers. She even taught several members of Bull City’s staff how to roll cigars.

Oxendine said he mostly smoked machine-rolled stogies* next door at King Corona, the popular cigar and espresso bar, but upon trying Matos’s hand-rolled cigars, he was hooked.

“All I smoke is her cigars now,” he said.

A block away, in a renovated space with exposed brick walls directly across the street from Centro Ybor, four cigar rollers sit at street-facing tables at Tabanero Cigars. It’s another newish operation — it’s only been in business for about four years, and just recently moved from Ybor’s industrial outskirts to a 7th Avenue storefront, which is larger and loftier than its competitors’ spaces along the street. Longtime Ybor denizens will recall that a bar occupied that space until a few months ago.

The cigars made here are sold in 62 different stores throughout the country and internationally on the web. There aren’t very many walk-ins, but the facility does offer tours highlighting Ybor’s cigar-making history as well as the old-school manufacturing process.

“We are an actual handmade cigar factory in the original tradition,” said Steven Stamberger, general manager of the space. “Part of our business philosophy is to retain the heritage of Ybor City.”

Even the space they occupy is historic.

It was designed by Gavino Gutierrez, a close associate of Vicente Ybor and the man credited with convincing him to come set up shop in Tampa. Gutierrez was a civil engineer, and he was responsible for the grid layout of Ybor City’s streets. This brick building is a monument to his success.

He thinks cigar makers have been able to hold on in Ybor despite economic and cultural changes — namely people quitting tobacco en masse — for a couple of reasons.

One, in a city that seems to have struggled with its identity over the years, Ybor’s cigar-rolling heritage makes for a pretty darned good story.

Two, the perception that cigars are something that only older, well-to-do males partake in is incorrect; people from every social strata — women among them — partake in cigars.

“A cigar requires you to slow down,” he said. “And you savor the cigar… What’s interesting is, if you have people sitting around smoking cigars, it could be a vagrant, a laborer, a gravedigger and the president of the United States. And everyone gets along and communicates because everything is about the cigar, and what the cigar brings.”

*Don Barco, owner of King Corona, says none of the cigars he sells are machine-rolled.