“This is going to be one of these historic storms..." 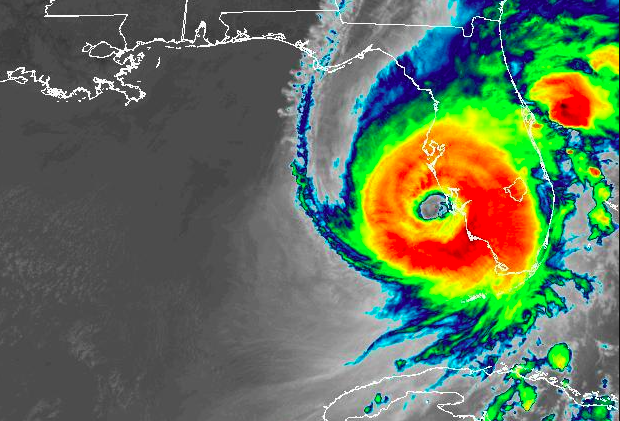 Photo via NOAA
Although Hurricane Michael struck Northwest Florida before Gov. Ron DeSantis was elected in 2018, recovery from the historic Category 5 storm shaped the early days of the Governor’s administration. Now, DeSantis and others are already placing Hurricane Ian among the likes of Florida’s most devastating storms ahead of the hurricane’s impending landfall.

Ian has strengthened to a powerful storm just shy of a Category 5 about 45 miles offshore of Naples. While the storm’s path has drawn comparisons to 2004’s Hurricane Charley, DeSantis and state officials have likened the expected devastation to that of Michael, the strongest recorded hurricane ever to hit the Panhandle.

For more than an hour, the storm’s eyewall has barraged the small coastal community of Capitiva on Sanibel Island ahead of its impending landfall.

“There’s some storms that really leave an indelible impact,” DeSantis said, speaking at a news conference in Lake City on Wednesday. The North Florida town is one of many in the future projected path of the hurricane.

“This is going to be one of these historic storms, and it’s really going to shape the communities in Southwest Florida and have a profound impact on our state.”

“We had fatalities as the result of that storm, but then you had so many other things that have happened all the way to this day that recovery goes on,” DeSantis said.

Under DeSantis, Florida has paid out around $7.6 billion in disaster recovery funding, the bulk of which is in response to Michael. That number includes $4.4 billion in public assistance funding.

Cleanup after Ian is going to take six months and the recovery is going to take years, DeSantis’ former Director of the Division of Emergency Management (DEM), Jared Moskowitz, told Florida Politics.

“Hurricane Ian is going to be on the list of Andrew, Michael, Katrina, Sandy,” Moskowitz said.

“When people are finally let back into the areas, there will be parts they don’t recognize anymore.”

Parts around Homestead are still recovering after Hurricane Andrew, the most destructive storm in state history, struck South Florida in 1992. Hurricane Irma in 2017 is considered the state’s costliest storm.

While DEM takes the front seat in the immediate response to a disaster, the Department of Economic Opportunity (DEO) plays a leading role in the long-term recovery following storms. Florida’s current DEO Secretary, Dane Eagle, hails from Cape Coral.

“I’m from Southwest Florida, so this is incredibly hard to watch, but as I mentioned, seeing what the Governor and the teams across the state are doing gives me hope,” Eagle told reporters Wednesday.

DeSantis has frequently reiterated his commitment to helping Northwest Florida recover and regularly returns to the region to announce new disbursements. Similarly, the Governor suggested Florida is prepared to assist Southwest Florida for years to come.

Jesse Scheckner of Florida Politics contributed to this report.