The Tampa Bay Times reporter was inaccurate, and I called him out on it. 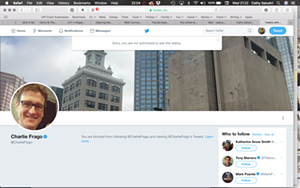 Screenshot
To be clear, he's in pursuit of the truth but will block other journalists who point out he did something untruthful.

And he blocked me.

On Thurs., May 2, Frago tweeted a Tampa Bay Times story about a reclaimed water spill and referred to it as sewage.

Let's go back: In my 20s, I experimented with public relations. For five years I worked as a public relations specialist for Pinellas County Utilities, where one of my jobs was educating people about reclaimed water. I spent many, many days talking about anaerobic bacteria, chlorine contact chambers and suspended solids. I even wrote a brochure about it, because the county had concerns that people will still be confusing reclaimed water with raw sewage. Cathy Salustri
Step by step: This is not raw sewage.

One of the things we did was produce something called a Consumer Confidence Report about reclaimed water. This was not mandated by law, although the EPA requires your water utility to send you one every year about your potable (drinking) water. We started doing it to show people that reclaimed water wasn't black water or gray water. (Here's the one the county produced in 2016.) What we learned from this testing was that the things that scare people about reclaimed water — concerns, say, that it has elevated levels of e. coli or fecal coliform or cryptosporidium or giardia — are non-starters. The chlorination process kills them. In South Africa, there aren't two sets of pipes, an Afrikaans USF professor told me; they had one. Our not drinking reclaimed water, when you boil it down (pun intended) is actually a luxury/perception issue, not a health one. Reclaimed water, treated to what's called a tertiary level, actually tests cleaner than our drinking water. It does have higher chloride (salt) levels (that's why it kills azaleas) and higher nitrogen and phosphorous levels than our drinking water (which is why it's fantastic at making things grow), but it's far from sewage. This, incidentally, is not my opinion. This is something scientists, engineers, and reasonably well-educated people accept.

So, yeah, it irritates me when people deliberately obfuscate the two, especially when they should know better.

Screenshot
Do you guys even get what integrity means? Because this is super-click-baity.

What had my attention was his tweet, though: "Baptism by sewage!"

How many people, I wondered, would read that and think St. Pete had another sewage discharge? Fun fact: People don't always click the links to learn the truth. Shocking, I know. And every journalist knows this, which is why Frago's tweet irritated me. It was irresponsible. It was muckraking. It was a betrayal of the public trust.

In short, in was the wrong thing to do because it's precisely the sort of thing that gives all those people who no longer trust reporters even more reason not to trust them.

So I retweeted Frago, but added my own thoughts: "Actually, the spill was reclaimed water, not raw sewage. Reclaimed water is treated to levels that are actually cleaner than our drinking water (but we don't drink it). Reclaimed water is used by many of you to water your landscape. This is why people don't trust the news."

What did I expect? No response, really — the Times has a longstanding habit of ignoring any other local media outlets. I don't know Frago and he doesn't know me. I certainly didn't expect him to delete his tweet or tweet a correction, although I wouldn't have been shocked to have him chastise me or reply.

What I didn't expect was that he would block me on Twitter.

But that's what he did.

Apparently, though, I wasn't the only one who called out the inaccuracy. Twitter user @jimjambo replied, "It's reclaimed water, not sewage. Do you even read the article your company puts out and you link to?"

Carfeful, Jim. He'll block you, too. And then where will you get your news? It's not like there's another local paper reporting accurately on any of this. One for all, right?

To recap: A reporter for the Times retweeted something with inaccurate commentary. I called out the inaccuracy — politely. And they blocked me.

That's... not how journalism works. That's not how any of this works.

But, hey, at least they have their Pulitzers.