The proposed total for TPD is $176 million. 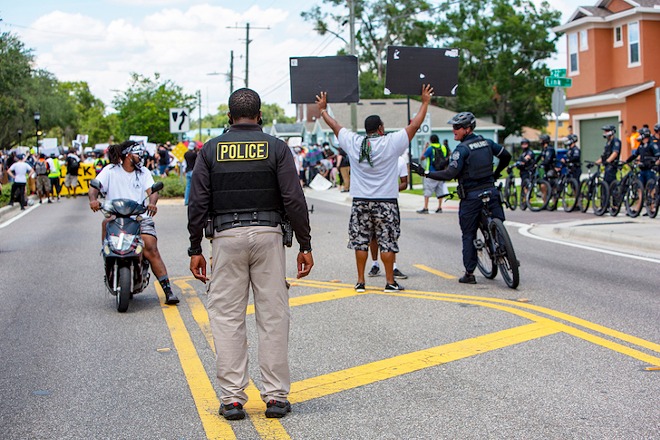 Kimberly DeFalco
Protesters in Tampa, Florida on May 31, 2020.

The police budget figure was not voiced in Thursday morning’s City Council meeting, during which the mayor shared her presentation for the FY2021 city budget of nearly $1.3 billion.

An unignorable detail of the mayor’s presentation was her ardent support for the Tampa Police Department, which she oversaw herself as Tampa’s chief of police from 2009-2015. The mayor’s pro-police spiel started out with her referring to TPD as “the best police department in the United States.”

“We are not willing to defund the police,” Castor said, saying that the city will instead focus on “investing, not divesting” from the Tampa Police Department. “I'm not saying this out of pride or arrogance, because we still have more work to do. I'm saying it because of the value of this high level of service that is virtually unmatched for similar cities.”

Throughout her mayoral city budget presentation, Castor continued to offer nuggets of praise for TPD officers, but largely focused on the City of Tampa’s five strategic goals moving forward.

These five strategic goals of the Mayor’s Strategic Plan include: Castor’s game-plan for addressing these five areas were conveyed with a hopeful tone, as the mayor stated her confidence in the city’s resilience.

“Despite every challenge, our city has already made major strides towards transforming Tampa’s tomorrow,” she shared, closing out her FY21 budget presentation.

Unfortunately for some of those who tuned in to Thursday’s City Council meeting, “Tampa’s tomorrow” currently does not include a mayoral recommendation to defund TPD.

Nor does Tampa’s tomorrow look like it will feature a gratifying response to protestors’ call to fire Tampa Police Chief Brian Dugan, who has been sharply criticized for his “brutal leadership” of TPD, stating that George Floyd had to get murdered for people to show up to Tampa Citizen Review Board (CRB) meetings, and other actions deemed impermissible by local protestors.

The department, which offers what Castor called a “high level of service,” has still not said whether it will charge mural painters over an unpermitted work completed over the weekend, but it did meet protesters with force and pepper spray on in June and on July 4. Then again, For TPD, illegally shutting down a street is perfectly fine, but only if you “Back the Blue.”

Castor also called for increased training for officers, but did not mention any other reforms demanded by local protestors, including follow-through on the body worn camera mandate for officers (which the city has already allocated $1 million for), the withholding of pensions and paid leave for officers under investigation, and requiring officers to be liable for misconduct settlements.

Noticeably, the mayor largely avoided any mention of the past few months of police brutality protests, instead praising TPD for a supposed 80% reduced crime rate in the last year. She conveniently left out that, since 2017, there has also been a 24% increase in use of force by police officers, and a 224% increase in the use of chemical agents like pepper spray.

What’s uncertain is whether Castor’s definition of “crime” includes police violence against protestors like a 17-year-old protester, who was tackled for “wielding an umbrella” on June 4. Activist Emadi Okwuosa—who was body-slammed that same afternoon, months before state attorneys said there was no evidence Tampa protest leader incited a riot during that June 4 demonstration. Many more protestors were also pepper sprayed and and victimized by aggressive use of force by officers during the Dale Mabry Highway demonstration on the Fourth of July.

The term “crime” also evidently doesn’t fit the actions of drivers who attempt to mow down Black Lives Matter protestors. There have been at least two incidents of Tampa protestors being injured by motor vehicles in the past two months, and one near-disaster on the Fourth of July as one alleged Tampa Police Academy student ploughed through the barriers created by protestors to block off traffic.

Incredibly, the St. Pete Police Department has reminded Pinellas residents not to hit protestors with their vehicles. TPD has not yet followed suit.

“By making Tampa safer, officers have helped pave the way for our city's economic success and improve the quality of life for Tampa residents,” Castor proudly stated. The “residents” Castor refers to here does not appear to include Joneshia Wilkerson, a young Black Army reservist whose life has been “in shambles” since TPD doxxed her in June (Wilkerson is currently under investigation by the Pinellas County Sheriff, which didn’t doxx her).

What else happened during the Tampa City Council Meeting?

The Twitter meme game of local protestors was strong, with at least one account creating memes in real time in response to the City Council budget presentation.

Protestors also called out council member, Charlie Miranada, for reading a Publix ad during the public comments portion, about two hours into the meeting. Is listening to the concerns of Tampa residents really less enticing than this week’s deals at Publix? CL reached out to Miranda's office for comment on the moment.

In the wake of the coronavirus pandemic, many public speakers also called on the City Council to support the reduction of the city’s jail population by reducing unnecessary arrests. Florida carceral facilities have become hotspots for the coronavirus.

Climate justice advocates from the Cleo Institute and Food and Water Action also called into the public comments portion to demand that the mayor’s Climate Action and Equity Plan involve a move to shift the city to 100% renewable, clean energy by 2030.

Another public speaker shared all of the names of Black Tampeños killed by the Tampa Police Department during the public comments portion.