In the face of white supremacists and reluctant city officials, Tampa Bay activists have no plans to back off

Despite DeSantis’ ‘anti-riot’ bill, the fight goes on. 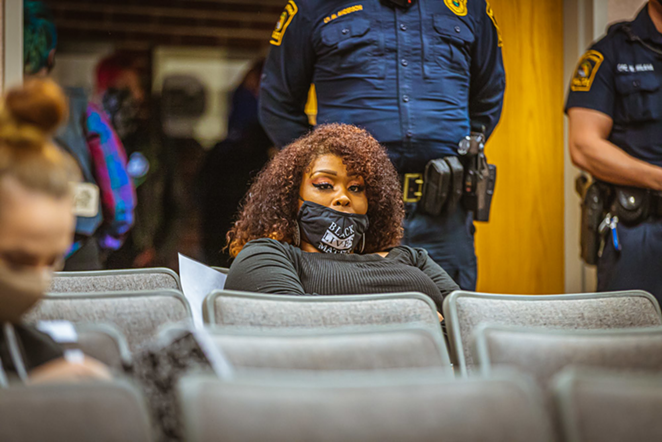 A year has gone by since George Floyd was murdered by former police officer Derek Chauvin, with Chauvin’s conviction in April being celebrated across the country and the world. Political thinkers have pointed out that activists are a major reason that there was a semblance of justice in Floyd’s case. During a long, hot summer and in the midst of the COVID-19 pandemic, millions of people stood up for Black lives, despite the harsh repression they encountered from the police and right wingers.

In the Tampa Bay area, tear gas, ramped-up charges, assaults and surveillance were used against protesters by the police. Far right counter-protesters attacked activists with vehicles and were released without incident. People standing up for basic human rights were treated like combatants in a war.

Creative Loafing Tampa Bay looked into what protesters faced over the past year, and asked activists to speak out on their experiences, along with whether or not they think progress has been made.

New Port Richey, a suburb in Pasco County that’s often overlooked in the news, gained the national spotlight last year when the Washington Post picked up on what CL had been actively reporting on for months. Activists claimed that the police there were siding with right wingers, especially the Proud Boys. Officials avoided charging Proud Boys for violent behavior, while arresting and citing BLM New Port Richey Protesters for any charge they could. Months prior, Str34mtv published a video of the police praying with Proud Boys members as they prepared to counter-protest Black Lives Matter New Port Richey. They brandished weapons and clashed with the BLM protesters.

No arrests were made of the Proud Boys, yet protesters have been charged with noise violations for using bullhorns. One protester, Marlowe Jones, was charged with a felony by police after trying to help a fellow protester who was attacked during a march.

Boneta says it’s when they were being charged with crimes that their movement began taking off, and people from other cities started coming to their protests more often in solidarity. But at the same time, the hatred from white supremacists increased.

“That’s when they really started showing up and getting aggressive, yelling the N-word and shouting ‘white power!’,” Boneta says.

When considering the question of whether or not all they went through made a change, Boneta gave a complicated answer.

Certain officers were held accountable, and for her, that’s a start.

Two officers, one who shared department intel with a right-winger, and another who participated in an abusive arrest that broke a man’s jaw (only to have the case thrown out by a judge), are no longer on the police force.

“The police here know they are being watched, and people are going to hold them accountable,” Boneta says. “And we’ve empowered people’s voices, built community and inspired people to run for city hall. So we’ve come a long way, but as for the current city hall members and police, we don’t feel like we’ve made much progress with them.”

BLM Pasco has a number of demands they’d like to see met, from instituting more policies that help shelter the houseless and providing assistance to the poor and disabled, to instituting a program similar to Eugene, Oregon’s CAHOOTS, where police officers do not respond to certain. But they feel like they’ve run into a brick wall with leadership and the police.

“They just want to shut us up in whatever way they can find,” says Boneta. “We will continue on though, until we live in a place we can really call home.”

Boneta was initially inspired to take action in her community through attending protests in Tampa last year, where there was also no shortage of resistance to protesters.

Groups like the People’s Safety Coalition (PSC) and Tampa People’s Protest (TPP) formed from a collection of activists who were fed up with the city’s response to the protests in Tampa. Aggressive police force was used against them, but for the protesters, it felt like their cries were going unheard.

“I got involved because I watched my community go through massive amounts of extreme trauma last year,” says Tatiana Morales, a protester turned activist, who’s in both PSC and TPP. “There was no way I could see all of that and not start doing more.”

Morales says that the city’s response was especially egregious compared to the rest of the country. Mayor Jane Castor, and the city council’s decision to increase the police budget more than any other major U.S. city felt like a slap in the face to Morales and other protesters. And when the activist community reached out to the city council, the mayor and other city leaders about what Morales refers to as “police war crimes” against protesters, they were “completely and constantly ignored,” she says.

Even requests for small police reform are silenced, says Morales, to the point where they as activists have stopped to ask the questions: Do city leaders even want a middle ground? And, are they even worth trying to speak to if they aren’t going to do anything about their concerns?

Groups like PSC and TPP have realized that they can’t turn to standard power structures to ask for issues to be dealt with. They have lost faith in politicians who they say won’t substantially change anything.

“Until we change our political structure, laws and leadership, we’re never going to advance,” says Morales. “And that’s what we’re working on doing.”

But now, activists have a dangerous new obstacle in their path. Florida Governor Ron DeSantis’ “anti-riot” law passed in April, casting a dark shadow over those pushing for political change in the state. The bill effectively puts in place heavier criminal penalties for protesting.

“The most ridiculous thing about his law is that it can put protesters, who are standing up for civil rights and freedom from death and wrongful incarceration, in jail for a long time,” says Epiphany Summers, Organizing Director of the Dream Defenders (DD).

The law makes blocking a roadway during a protest a felony, denies bail for protesters until their first court appearance, and creates new crimes such as “aggravated rioting” (which carries a sentence of 15 years in prison) as well as a crime called “mob intimidation.”

Still, activists are continuing the fight, just as they did last year. Protests across Tampa Bay and Florida still regularly occur despite the law. And DD, along with several other groups, are suing DeSantis over the law.

“It is in direct response to OUR movement, a movement that brought 26 million people to the streets to demand a better world last summer,” DD wrote in a post announcing the lawsuit. “Protest is a part of our legacy, and Ron DeSantis wants that legacy to end.”

St. Petersburg announces plans for Fourth of July fireworks celebration at the pier