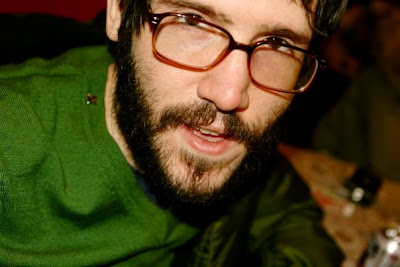 Lawrence Bonk has begun a year long journey and music project called Another Day On Earth. This project requires Lawrence to write, record, and post one song each day for an entire year. He says, "Some may be good. Some may be bad. Whatever. I guess I'm trying to teach myself to let go and be happy with things as they are. Here are the rules I have come up with: They have to be written and recorded that day. However, once a week I am allowed to post something I had laying around to give myself a break. That's it pretty much. There are no rules regarding length or epic-ness of content. We'll see how I'm feeling that day." As if recording a song a day isn't enough of a challenge, Lawrence's recording set up doesn't make this any easier. His equipment includes an old laptop and a karaoke microphone that was made for a Nintendo Wii game. 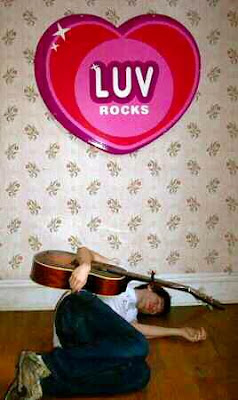 Aly Carr: You live in Brooklyn now, but didn't you used to live in Florida?

Lawrence Bonk: Born and raised, yeah. Ft lauderdale/Miami area for most of my life and then Tallahassee for college.

AC: Go Seminoles! So, why did you leave us!?

LB: That’s actually a long story. I don't know if I can tell it all. I moved up here to record at this fancy pants studio for free, but suffice to say, it got majorly cluster fucked.

AC: So, now that you're there, do you plan on staying for a while?

LB: I don’t know. I’ve been here a few years now. It really stresses me out. I don't know how long I’ll stay. Probably at least the year because moving and still doing this will be hard. I've actually thought of that. What am I gonna do? Write a song in the moving van? I guess I could.

AC: So, did you ever end up getting to record in the fancy pants studio?

LB: A couple of times. I ended up burning the reels

LB: I worked on an album for...2-3 years? Yeah. It got so clusterfucked that I burned em. I went kinda nuts. So this is the exact opposite of that. Instead of ...3 years given to like 12 songs. This is...one day given to one song.

AC: I can't imagine what it must have felt like to burn 3 years of your hard work. Would you say it was like a death? or was it empowering?

LB: I’m not sure. I think it was just something I needed to do. It was definitely more empowering than a death because I think the death feeling was what led me to want to burn them in the first place. I actually found one recently that escaped but I don't have the tape player to play it anymore. I don’t know what’s on it.

AC: That might be an interesting tape to play and revisit that time, now that you're in such a different place.

LB: Yeah but I’m also the type of person who hates every song he does 20 minutes after he does it. Which isn’t exactly healthy but it also keeps me going.

LB: I'm not sure yet. Not as much as I'd like. Now that people actually listen it kind of puts a slightly different spin on that.

AC: How does it put a different spin on it?

LB: Well I'm not sure. It kind of activates perfectionist tendencies. But at the same time, my set up is really so limited and small that I can't go too nuts over any song. Not all that many options.

AC: So its a double whammy of pressure that is facing you. You started this to be okay with things as they are and just let them go. But now you've got a pretty big audience that makes it seem like its nearly impossible.

LB: Yeah kind of. Exactly. But at the same time, I'm sure I’ll get into a groove where I can, I dunno, stress out over maybe 2 songs a week. Do like two 12 hour days. And the other five just knock out quicker stuff. Plus, I want to work with other people! If anybody in Brooklyn reads this..

AC: Also on your website you say at the very bottom "P.S. I’m scared." Are you just trying to be funny or are you actually scared?

LB: Both. It's kind of a tall order to be inside yourself in such a drastic way for so long. I'm a bit scared of that.

AC: So you post these songs, once a day, with a picture and generally at least one line of text. On one day you said something in one of your posts, "I guess I sort of want some semblance of a normal life, eventually." What is your idea of a normal life?

LB: I'm not sure. Some kind of romantic notion of having a basil garden mixed with sleeping regular hours. Maybe having a dog. Spending quality time with people where I'm not thinking of ways to sneak away so I can work on a song. Swimming. I have very specific ideas of what a normal life is and swimming is always included.

AC: hahahaha. What is it about swimming that is normal? I love it, but to me it feels like an un-natural activity. I mean, you can DROWN.

LB: Yeah. It's true. There is a danger element. But I don't know. I think I like it a lot because it's the only physical activity I can do and shut my brain off. Almost get into a trance state. I think I like swimming for the same reason I like making music. 4 hours will go by and you won't even know how. But all you know is you were just intently doing something.

AC: Yeah, that’s a really good feeling. On another day you posted the song I Was Alone and said in your blurb "Sundays are depressing." What is depressing about Sundays? Beside of course, the fact that god is watching you....

LB: hah they aren't really. I don't know. Yeah, that feisty god. I just think I was trying to divert from the fact that it was a sappy love song and I didn't want anyone to think it could be about them. I get kinda conscious of that stuff. And of course it was about someone. It always is.

AC: What would be the worst case scenario if the person who it was about actually knew that it was about them?

LB: Well, I just think that people who don't write songs don't know what writing a song is. I get paranoid they'd think I was hung up or something. When in actuality...who knows where songs come from? Or anything like that? They just kinda...pop out. Sometimes they mean something. Sometimes they don't.

AC: I can see how the possibility of misinterpretation would provoke anxiety. So, if you were an outsider and you heard about a guy doing what you are doing, what would your initial impression of that guy be?

LB: That he was pretty nuts and cool. I guess it would depend on if I liked the songs. But I'm always attracted to bombastic displays of nonsense. Once I met these people who make these adventure computer games. They spend, sometimes years on them. Years and years. And then when they are done they just get posted to this message board and the 9 other people on the board play it and that is that. No real...reason. Just this huge display and huge effort for the fuck of it. I like that.

AC: That kind of passion is extremely inspiring. What you are doing is really time consuming. Do you have a day job?

LB: Sorta. I haven't exactly figured out how to juggle both yet. I'm a freelance writer and I just don't feel like doing it lately. So yeah, homelessness is one of the only things that can stop me from completing this. Homelessness. Serious illness. Uh, getting kidnapped by music hating aliens might do it.

AC: hahaha. What do you write about?

AC: What a funny parallel. On one hand you are doing something that means so much to you, I mean, this project that you're doing… this song writing and creating... it IS you. And then you also spend time writing about things that mean nothing to you. It's an interesting dynamic. I would imagine that it has to give you some sort of sense of balance..

LB: Yeah, eventually. I mean, it's not bad work. I’m able to be funny most of the time. And it's super easy and I do it from home or a coffee shop. I am definitely in the market for balance though. Ideally doing like, 3 songs a week would give me balance but...that lacks the romantic awesomeness of every single day. And I love romantic awesomeness.

AC: Well, Lawrence, we love what you are doing and I really appreciate you taking the time to talk to me.

LB: Thank you! I love what you are doing too. It’s refreshing to see a music site that was obviously put together with such passion and its also devoid of snark. I live in Brooklyn. There's so much fucking snark here it’s deafening.

AC: I think we get the same feeling from what you're doing. ?