Nearly a year after demanding more protection of the graves, the site within the forest preserve is still being ransacked.

Photo by Justin Garcia
Members of FIA during a hike through USF Forest Preserve to investigate a sacred burial site that's being looted.

Indigenous activists are demanding that University of South Florida immediately place warning signs around looted Native American graves within USF's Forest Preserve, after nearly a year of asking for more protections for the site.

The group's demand for signage comes after continued evidence of grave robbing, and what local Native Americans see as an inadequate response from USF to their demands for more protections.

In the months following  USF's Request for Information (RFI) to develop the preserve in April of 2021, there was an uptick in the looting of sacred burial mounds, a practice that has been occurring off and on at the property for decades.

In June of last year, the Florida Indigenous Alliance (FIA) asked for more protections. This year, USF dropped its attempt to develop the preserve through the RFI. But the group says the site is still vulnerable because USF hasn't made it clear to grave robbers that they are not welcome.

"We have previously requested USF place signs on the forest preserve denoting that grave robbing is illegal in Florida," FIA wrote in a statement. "We have shown them that the site has been repeatedly looted after USF put out the RFI, and they have had months to procure and place the signs. For an insignificant amount of money they can finally begin to show they intend to protect the curial sites within the preserve, and so far, USF hasn’t even managed to do that."

FIA wants signs around the area to express this, so that grave robbers can be properly warned that they are open prosecution for desecrating the site.

FIA gave credit to USF for sending a campus police officer with them last year to investigate the scene. It was then that the group was told by the USF police  that it's harder to pursue charges on the grave robbers without warning signs being present.

Evidence of looters, including a small saw and a the head of a hammer, chairs, debris and litter, are still found throughout the area. The litter not only disrespects the sacred site, but also puts the wildlife in the area in danger. 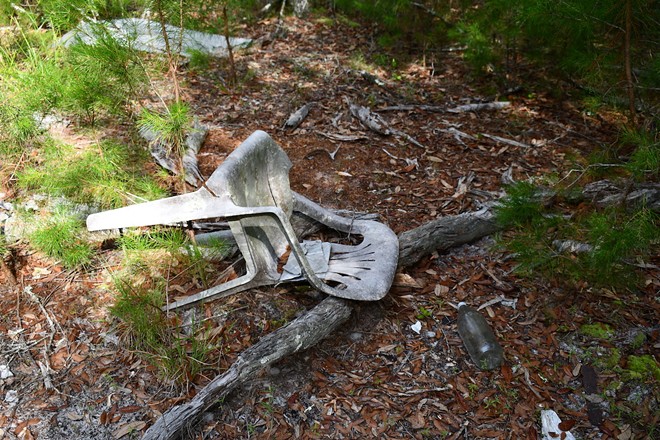 Photo by Justin Garcia
A broken plastic chair and an empty bottle sit near a sacred burial site.
Robberies of Native American gravesites regularly occur across the country, despite the laws protecting them. Experts say racism toward Natives leads to looters disrespecting their ancestors’ graves. The grave robbers are rarely pursued by law enforcement.

USF Tampa drops forest preserve development as Indigenous activists demand protection of sacred burial site: While development plans are off for now, Indigenous graves are still in danger of looting and destruction.

CL reached out to USF and USFPD's communications teams with questions about why signage hasn't been posted around the area, almost a year after FIA asked for more protections.

"The USF Police Department continues to take steps to help protect the indigenous human burial site located within the North Fletcher property," wrote Audrey G. Clarke, Public Information Representative for USFPD in an email. "In partnership with other law enforcement organizations, the USFPD is prepared to follow up on any leads, and apply criminal charges against anyone who engages in disturbing the burial site.To effectively do so, we don’t believe it’s appropriate to discuss or divulge investigative systems or strategies."

The agency did not answer the question of if they can press charges on looters without the signs being posted, but did say that the agency has not heard of damage or disturbance at the site since CL last inquired about the situation three months ago.

Last year, USFPD said the looting became an active investigation in May of 2021, as soon as the department found out about substantial looting that occurred. At the time, USFPD said it was working in coordination with “other state and local agencies to assess the extent of the damage and determine further investigative actions.”

The department said it was aware of FIA’s request for additional security and was working with USF leaders to “consider the appropriate next steps for restricting unauthorized access and discouraging further damage.”

Yet, almost a year later, FIA is still asking for their small request of signage to be fulfilled.

FIA says that if USF refuses to take more steps to protect the sites in the future, the group will take things into its own hands.

"We cannot tolerate continued looting of those sites, and we will act to protect the burial sites," FIA wrote.