Inside the secret world of white supremacy

A visit to Laurens, S.C. 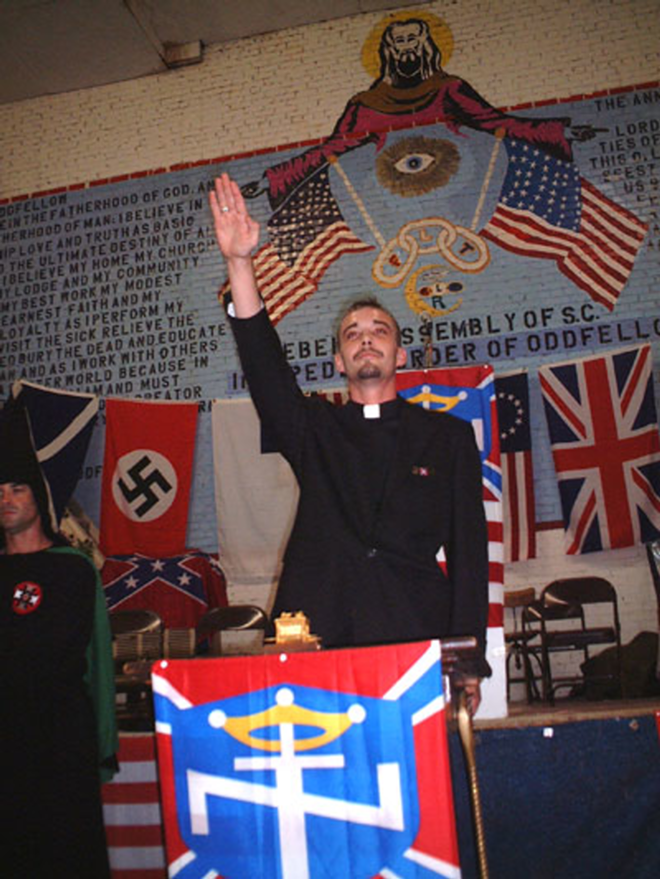 John Sugg
A RELIGION OF RACISM: Aryan Nations Senior Pastor Jonathan Williams says blacks are "soul-less mud people" and that Jesus "was not a Jew."

The squirt-sized black kid, maybe 8 years old, was pedaling his shiny orange Mongoose bike around downtown Laurens, S.C. He scooted down a side street with a cheery "Hello, mister" to a passerby and then waved at a passing police car.

A few hours later, early on a September Saturday evening, the boy was back, zipping past the Echo Theater on Laurens' courthouse square. The one-time movie house is now dubbed the World Famous Redneck Shop, and a convention of the white supremacist Aryan Nations was boisterously concluding inside.

The Redneck Shop is crammed with racist memorabilia, everything a fashionable bigot would need, from cheap Confederate flag flip-flops and bikinis, to T-shirts that announce, "Ain't Racist, Just Never Met a Nigger I Liked." The shop's operator, John Howard, boasted that he's been a "member of the Ku Klux Klan for 40-some years," many of them as a grand dragon in the Carolinas. He proudly pointed to a decades-old studio photo of him in emerald Klan robes.

The Redneck Shop was packed that day with like-minded racists from across the nation and even Europe. They'd been listening to speeches with an unambiguous message: Hate Jews, blacks, Mexicans, gays, mixed-race couples, the FBI, "Jew-media" journalists, liberals, Arabs and Orientals, more or less in that order of abhorrence. As the speakers' diatribes died down, and the brutal ka-thud ka-thud of a hate rock band filled the auditorium, the crowd, fully pumped with vitriol, began exiting into the Echo's lobby.

That's when the black kid rode past.

Howard, whose girth stretched an aquamarine knit shirt almost to the point of splitting seams, clambered down from a stool behind his sales counter, shook a stubby finger at the child and loudly sneered: "There's a nigger there I'd like to hang."

Snorts and hoots and hollerin' greeted Howard's just-shy-of-serious invitation to a child lynching. One rotund fellow in tattered overalls and a bushy blond beard winked at his compatriots, slapped his thigh and began an exaggerated pantomime of pulling a rope. Howard, picking up on the crowd's enthusiasm, hastily played a recording by a country band, what he chortled was "some damn good nigger music." The lyrics, unlikely to win a Grammy, began: "I'm an Alabama nigger and I wanna be free / I'm a member of NAACP."

The boy wasn't murdered — almost a surprise after 24 hours of high-octane racism at what was billed as Aryan Nations' 25th Annual World Congress. Even odder, this portal into an alternate universe of in-your-face hatred began the night before with a love story.

The official name of the organization is the Church of Jesus Christ Christian/Aryan Nations. Where you have churches, you have weddings.

On the Friday evening prior to the congress, Aryan Nations' leader, "Senior Pastor" Jonathan Williams, married an Alabama couple. The bride, Carrie, wore appropriately Aryan tattoos and a beige gown. The groom, Joseph Frieda, sported the powder blue uniform shirt of Aryan Nations. The star was the couple's heartbreakingly beautiful blonde daughter — not more than 6 years old, beribboned, adorned with flowers and attired in a dazzling, crisp white dress — who precociously worked the congregation, proudly talking about her mommy and daddy.

John Sugg
TRUE COLORS: The Klan was out in force for the Aryan Nations congress. One grand dragon said that what he "really hate[s] is white women with little mongrel babies."

The ceremony was the conventional "I do" ritual — conventional if you ignored Williams' bodyguard standing stage right dressed in ebony Klan robes and a towering black hood.

One of Aryan Nations' inner circle, Shae Spring, quipped just before the service that she could hardly wait to get out of her dress clothes, "put on a Nazi T-shirt and kick back."

The true believers in an all-white America arrived Saturday morning. They came from Florida, Washington State, Wisconsin, Idaho, Arkansas and most of the states in the Deep South. At least two crossed the Atlantic to attend. By 1 p.m., the old Echo Theater auditorium was packed with a crowd dressed largely in black T-shirts and with more tattoos per square inch of flesh than would be found at a skin artists' convention.

Arcing over the crowd in the theater's balcony was Howard's "Klan Museum," now officially closed but still displaying artifacts such as KKK emblems and photos of cross-burnings. Nazi flags were draped from two-story-high scaffolding inside the theater. The tower's bottom bars served as a makeshift closet to hang Klan robes when not in use.

More banners were strung together across the back wall — Old Glory; Old Glory stripped of its the stars but with the Aryan Nations emblem in their place; the red, white circle and swastika of Nazi Germany; the rampant lion on the yellow and red Scottish flag; the white background, blue box and red cross of the Christian flag; and the absolutely essential Confederate battle flag. Behind the pennants, the light blue wall was adorned with a bigger-than-life-size drawing of Jesus and, discordantly for an Aryan Nations congress, "brotherhood of man" inscriptions of the International Order of Odd Fellows (which wasn't part of the gathering).