After weeks of allegations and scrutiny, a damning report dealt the final blow to the outspoken lawmaker's tenure. 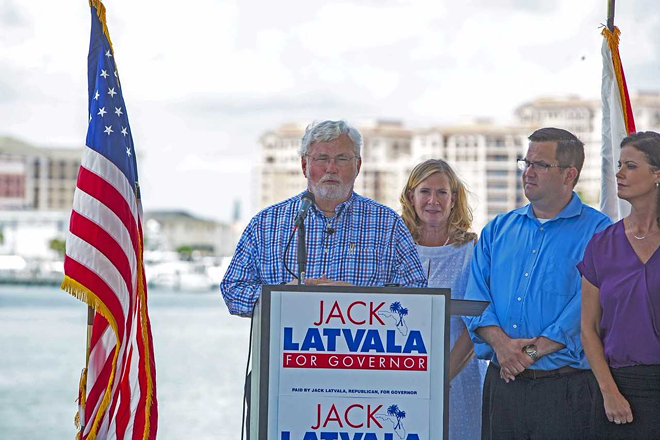 Kimberly DeFalco
Latvala speaking to his supporters at Clearwater Marine Aquarium on the day he launched his gubernatorial campaign in August.

Latvala has gone to great lengths to maintain that the allegations against him are false, and at one point he even took a polygraph test to prove his innocence.

But his adamant assertions that he, a powerful politician who until recently chaired the Senate Appropriations Committee, did not engage in inappropriate sexual behavior with lobbyists and legislative aides weren't enough to spare him of the scrutiny and condemnation that has befallen many men accused of similar misconduct in recent months.

What appears to have spurred his resignation was a judge's conclusion that there was probable cause for a public corruption investigation of Latvala.

The findings — among them "allegations that he told a lobbyist he would support legislation if she engaged in sexual acts," NSF reported — prompted Governor Rick Scott to call on Latvala to resign.

In a letter the Tampa Bay Times posted on its website, Latvala wrote that he “maintained that the charges in the original complaint are fabrications and say that still today.”

His resignation will be effective on Jan. 5.

Unlike many of those accused of sexual misconduct or worse over recent months as part of the #MeToo movement, a watershed moment for sexual harassment and assault victims, Latvala refused to back down, either by leaving office or suspending his campaign for governor.

To Latvala's supporters, it all seemed like an effort his political enemies — namely, other powerful Republicans trying to torpedo his run for governor — engineered in order to neutralize a formidable threat to their own interests.

As yet, Latvala has not officially dropped out of the governor's race, but News Service of Florida reported earlier this month that financial contributions to his campaign took a nosedive since the allegations first came out.