The state senator from St. Petersburg has a more modern take on the substance than some of his fellow Republicans. 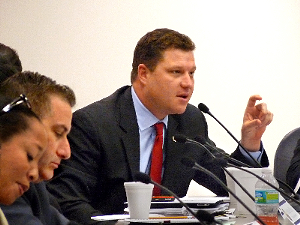 On the heels of Attorney General Jeff Sessions' announcement that his office plans to reverse an Obama-era policy that paved the way for legal marijuana in many states, some Republicans, like U.S. Senator from Colorado Cory Gardner, are calling the new policy out for what it is: backwards.

Voters in Colorado, of course, approved legal recreational marijuana years ago (and quite a few other states have followed suit). But Sessions has compared the stuff to heroin, which might make one wonder what he's on.

Sure, since the state legalized recreational marijuana, Colorado has seen a possible spike in traffic deaths involving the substance as well as what may have been an overdose (though doctors aren't really sure). But comparing weed to heroin? A drug that caused more than 15,400 overdose deaths in 2016 alone? What year is it? (Oh, right, this is Jeff Sessions we're talking about, so probably 1955...in Alabama.)

A seemingly growing number of Republicans don't see Reefer Madness-era fears as pivotal to the medical marijuana debate, but instead see it as an issue of states' rights and free market values — even in Florida, where Sessions-like pols reign supreme.

State Sen. Jeff Brandes, a St. Petersburg Republican, is definitely not on the same page as Sessions.

Unlike most of his Republican colleagues in the legislature, he backed the state constitutional amendment legalizing medical marijuana, which voters overwhelmingly supported in 2016, and pushed for a more open, free-market approach to bringing it to patients as his colleagues dragged their feet on the amendment's implementation and instead sought to limit supply.

On Thursday, Brandes took to Twitter with a succinct message about the Trump administration's latest move on marijuana: