The subpoenas sought to force testimony in a hearing Tuesday in the public-records lawsuit filed against the administration by the center, an open-government group. 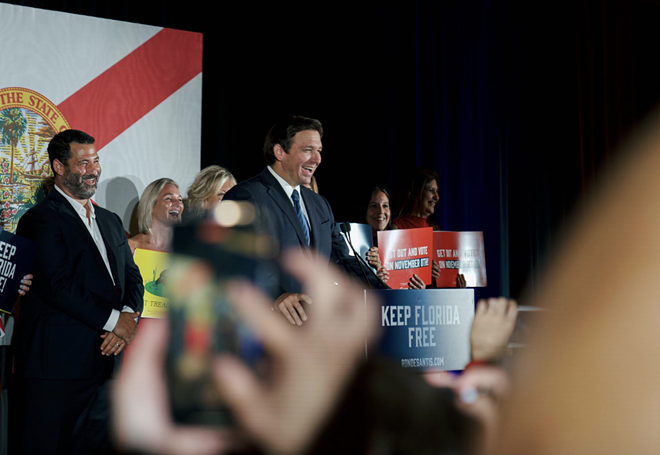 Photo via DeSantis/Twitter
A Leon County circuit judge has rejected subpoenas that sought to force two top aides to Gov. Ron DeSantis to testify in a public-records lawsuit stemming from controversial flights of migrants to Martha’s Vineyard in Massachusetts.

Judge J. Lee Marsh issued a two-page decision Sunday that quashed subpoenas the Florida Center for Government Accountability had issued to DeSantis Chief of Staff James Uthmeier and Larry Keefe, a public-safety adviser to the governor. Marsh also shielded Chris DeLorenz, a records custodian in the governor’s office, from testifying.

Marsh ruled after the DeSantis administration filed a motion late Thursday seeking to block the subpoenas, which were issued by the Florida Center for Government Accountability. The subpoenas sought to force testimony in a hearing Tuesday in the public-records lawsuit filed against the administration by the center, an open-government group.

The ruling agreed with DeSantis administration arguments that Uthmeier and Keefe should not be required to testify because of what is known as the “apex doctrine,” a legal concept that generally shields high-ranking officials from testifying if information can be obtained in other ways. Marsh wrote that the administration provided “declarations explaining that Mr. Uthmeier and Mr. Keefe lack unique, personal knowledge of the issues being litigated.”

“In addition, the court finds that plaintiff has not met its burden because taking the testimony of Mr. Keefe and Mr. Uthmeier is not necessary for this public records lawsuit,” Marsh wrote.

Also, Marsh wrote that the subpoena for DeLorenz was “an annoyance, oppressive and an undue burden” under a legal rule.

“The court will not set the precedent that EOG’s (the Executive Office of the Governor’s) records custodian may be haled into court without a good faith basis to contest his declaration,” wrote Marsh, who held an emergency hearing Friday on the motion to quash the subpoenas.

The Florida Center for Government Accountability filed the lawsuit Oct. 10 and alleged that the governor’s office did not comply with requests to release a series of records about the flights, which carried about 50 migrants from Texas to Massachusetts and drew national attention. The center issued subpoenas last week.

The DeSantis administration released some records, but the center said in the lawsuit that the release was not “responsive” to requests made Sept. 20 and Sept. 21 under Florida’s public-records law. Also, Andrea Flynn Mogensen, an attorney for the center, sent an email to DeLorenz on Oct. 17 that said the administration had not provided such things as a text log and a phone log for Uthmeier, according to a document filed Friday in the case.

“We reviewed the (records) production and did not see any log of text messages sent or received by Mr. Uthmeier,” Mogensen wrote in the Oct. 17 email. “If we have overlooked anything please let us know.”

The center also has filed a separate public-records lawsuit against the Florida Department of Transportation and Vertol Systems Company, Inc., which received a state contract to transport migrants. That lawsuit remains pending.

The two flights on Sept. 14 carried migrants from Texas to Massachusetts, with a stop at an airport in the Northwest Florida community of Crestview. The DeSantis administration tapped into $12 million that the Legislature provided to transport undocumented immigrants. Part of the controversy centers on Florida flying migrants from Texas.