With help from Duke Energy the city is installing them with the intention of lighting its streets more efficiently. 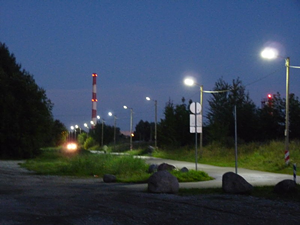 On the heels of his second inauguration as mayor, St. Petersburg Mayor Rick Kriseman is heralding the start of an initiative to transition all of the bulbs in the city's streetlights to LED lights.

The effort, which Kriseman and others will detail at 6 p.m. Thursday at Silver Lake Park (1311 11th Ave. S.), aims to save the city money while reducing its carbon footprint. The city is partnering with Duke Energy to get it done.

“More efficient lighting moves us closer to our goal of reducing our city's carbon footprint, saves money, and will help to make our neighborhoods even safer,” Kriseman said in a written statement ahead of the event.

“We’ve received positive feedback from other communities that have upgraded to the cost-and energy-efficient alternative of LED lighting. St. Pete shares our goal of providing cleaner, smarter energy solutions that our customers value, and we’re happy to partner on this initiative that furthers that goal,” he said.

While LED lighting is more fuel efficient and could save the city significant amounts of money while helping it reach its goal of being a zero-emission city, it's not without its potential pitfalls.

As CNN noted in 2016, the American Medical Association warns that LED bulbs of a certain intensity (measured in degrees of "color temperature") can potentially cause damage to eyesight and disrupt the human circadian rhythm.

In an emailed response to CL's question about the safety of the lighting, Kriseman spokesman Ben Kirby said the bulbs will emit light with a color temperature of 3000 kelvin, which is what AMA advises — and that St. Pete is the last city in Pinellas County to install them.