The day after the election, McBride, who owns a men's clothing store in St. Petersburg's Edge District, was apparently so upset that he affixed a note to the door of his storefront indicating his business would be "closed until further notice" and that he would accept prospective clothing buyers by appointment — but only if they had voted for Baker.

"We will no longer be buying any clothing til [sic] we figure out if we still want to live here," the note reads. 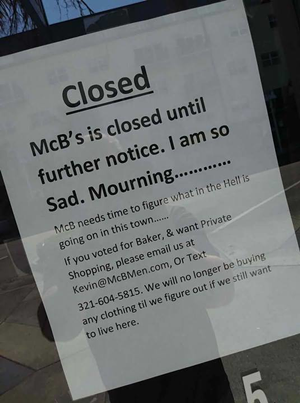 Needless to say, the note got many a share among Kriseman supporters, who thought it was a hoot.

On Sunday, McBride posted a nine-minute video to his YouTube channel in which he decried his critics and blamed them for negative reviews on Yelp and other review sites, as well as social media, where some users mocked the views he expressed. The main culprit, he said, were "Kriseman cronies" whom he alleges have never even set foot in his store — namely, members of the LGBTQ community, whose support for Kriseman was early and ardent. In the video's description, he claims he is being "attacked" by the gay community.

At around the five-minute mark, the rant degenerates into an attack on the community itself and their efforts to achieve and maintain equality and acceptance.

The gist: you have equality, so shut up.

Here are a few excerpts if you don't feel like clicking.

"Ever since you had your independence and got accepted many years back, you went on with it," he said. "You kept pressing forward. And you've been greedy and selfish and you keep moving forward like...Once you got your equal rights and you started being respected and accepted into our lives, you went on and pushed. I don't know if you watched the red carpet shows, or, you know E! channel, but you're just constantly complaining and pressing for more when you've already been accepted. So be happy, move on, stop complaining and critiquing...every little issue about everything. I mean, really, you've got it good."

He accused the LGBTQ community of attacking "like piranha" whenever someone expresses a view with which they don't agree.

"We love you, great, you make the world a better place, so isn't that good enough?" he said. "Stop pressing forward trying to get more power, more respect."

Then, there was this gem:

"A lot of these people coming after me is a varied form of racism. So I'm going to call it a 'gayist,' kind of like a...racist. It's a gay person who is biased, does not accept or discriminates against a non-gay community person."

McBride said he is developing an exit strategy for his business.