Snack City's famous ice cream may become a thing of the past. 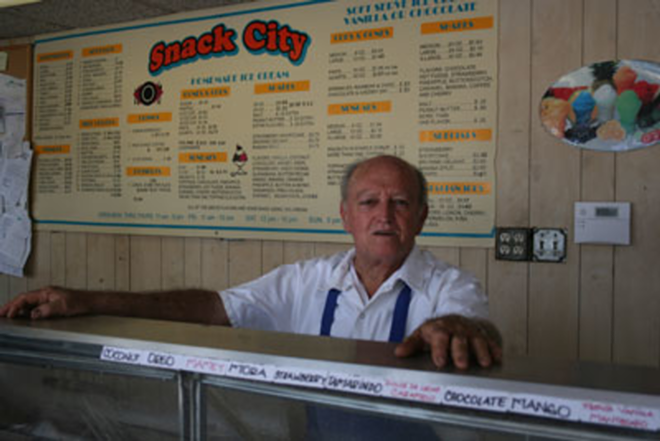 The unassuming storefront on a run-down stretch of Columbus Avenue near Armenia doesn't look like much, but those who've spent time in West Tampa know that Snack City is more than meets the eye. Inside, Alfredo Naranjo greets his customers, mostly in his native Spanish, and seems to know everyone by name.

The self-taught ice cream master has been a fixture in the area since 1980. Alfredo's ice cream is renowned; it was even featured in the New York Times recently. Snack City devotees maintain that his ice cream is the best in town.

"Everywhere I go, everyone knows me, the ice cream man," he says with a Spanish accent.

He became an ice cream man as if by fate. Trained as a lawyer in Cuba, Alfredo came to the U.S. more than 40 years ago seeking refuge from Castro's regime. He spoke little English and had a family to provide for. Unable to practice law in the States, he found work renting an ice cream truck in Elizabeth, N.J., in 1964. He opened his first store soon after, but sold it to move to Tampa 26 years ago.

Since then he has worked non-stop perfecting his craft. He makes his ice cream from scratch daily, and his standards are exacting: "Anything I make has to pass my personal test," he says.

With more than 40 flavors to choose from — from the traditional vanilla, chocolate and strawberry, to tropical flavors like mango, coconut, mamey and guanabana, to other delights like caramel and Oreo — Snack City is an ice cream lovers' paradise.

Eight-year-old Jasmine Velasquez has been coming to Snack City since she was a baby. Her favorite flavor is chocolate. "People are addicted to the chocolate," Alfredo says.

But coconut is his most popular flavor, and of his orange-pineapple, he says, "nothing can be better than that."

Alfredo's days as the reigning ice cream king of Tampa may be numbered. The owner of the property where Snack City sits is looking to sell, and Alfredo will most likely have to close down his business.

"The possibility is very high ... my destiny is out of my hands," he says of the closing. Nothing is final yet on the property: "It could be a year, could be two or three, could be never," he says, but when that day comes, Alfredo is virtually certain that Snack City will be history.

He's thought about moving; he's looked around for another location, but says he wouldn't be able to pay a higher rent.

At 73 years old, Alfredo knows that retirement makes sense, but he's not entirely at ease with giving up the business.

"If I quit, the ice cream is no more," he laments.

Although his recipes aren't a secret — he claims he learned all he knows from books — no one in his family wants to take over for him. "The problem I have and my mistake is that I don't get rich," Alfredo says.

With cones for $1.40, shakes for $1.63, most of his modest income comes from serving traditional Cuban food. But he prices his sandwiches under $3 and dinners for around $5, so he's not exactly raking in the dough.

But it's never been about the money for Alfredo. "I like it here," he says of his store. "I create a personality. The people know me, the people love me. It's a big family."

Know of restaurants opening or closing? Have news of new chefs, new dishes or other culinary gossip? E-mail [email protected].