The yin and yang of summer movies 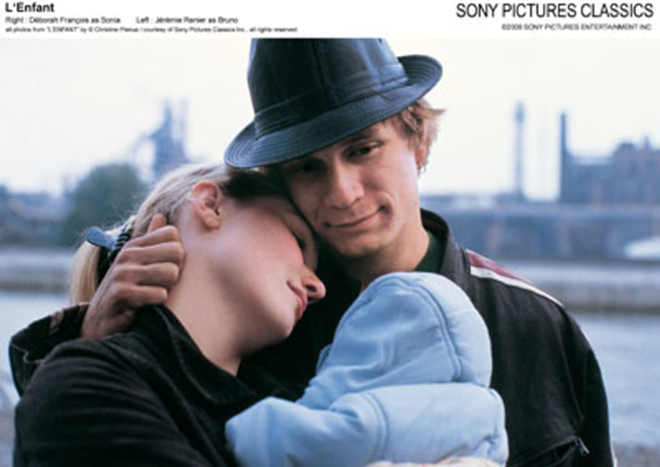 The first thing that jumps out at us in L'Enfant (The Child) is a door being slammed in someone's face. The door could be any door but it's the face that matters. It belongs to Sonia (Deborah Francois), an aimless 18-year-old who is certainly no stranger to slammed doors and other disappointments. As L'Enfant opens, we find Sonia, freshly sprung from jail and squalling newborn in tow, bounding up several flights of stairs, only to discover that her lowlife boyfriend has rented out her apartment to strangers, and distinctly unfriendly ones at that. Cue slammed door.

That door is only the first in a series of closed entry points, gray skies and mixed blessings punctuating the latest film by Jean-Pierre and Luc Dardenne, two Belgian brothers who have over the past decade created a difficult but often astonishing body of work. The Dardennes' films (which include the masterpieces Rosetta and The Son) are like no one else's, although they are clearly extensions of an earlier time, an unfashionably serious auteur-cinema that's much admired abroad and anathema in the land of the multiplex. The brothers have never come close to winning an Oscar, but L'Enfant is the second of their films to snag the coveted Palme d'Or at Cannes.

The latest in the Dardennes' series of examinations of fringe-dwellers, L'Enfant hones the brothers' austere, uncompromising vision to its minimalist essence. Taking place in the Belgian steel town of Seraing, L'Enfant gives us a day or two in the lives of Sonia, her baby, and the baby's father, a callous young prick named Bruno (Jeremie Renier). As to whom the movie's title applies, take your pick.

The film's primary focus, however, is reserved for Bruno, a greasy bottom-feeder whose hand-to-mouth existence depends largely upon purse snatching, petty cons and panhandling. Bruno routinely does some very bad things and he has absolutely no sense of parental responsibility (or any other sort of responsibility), but he's not malicious so much as he's just casually amoral and utterly unmindful of consequences. Bruno's like the scorpion in the fable of the scorpion and the frog, stinging simply because it's in his nature.

It's that nature that prompts Bruno to sell his baby on the black market, a pivotal act that becomes all the more chilling in the banality of its execution. One moment Bruno is standing in line at the unemployment office, and the next moment, he's trading his kid for quick cash.

The action speaks for itself and the Dardennes, who got their start making documentaries, depict it in something close to real time and without a whiff of melodramatic flair, positioning the buying and selling of the child as simply one among a series of quotidian events. Bruno and Sonia spend a pleasant afternoon driving around in a rented car, Bruno unloads some stolen merchandise, Sonia collects her welfare, a baby is sold. All in a day's work.

But Sonia is aghast at the loss of her child, which comes as a surprise to Bruno ("We can have another," he promises, flashing the cash at her), prompting him to spend the rest of the movie jumping through hoops and dealing with bad customers in an effort to set things right. Whether Bruno has any actual understanding of the meaning of his actions is not an easily answered question, but it becomes central to the Dardennes' finely tuned universe, where each character's humanity is revealed in terms both social and spiritual, through his or her connection with others.

Although Bruno and Sonia might be taken for just another pair of unpleasant mediocrities, L'Enfant finds unexpected grace in these blank-eyed misfits, eventually allowing us a glimpse of the extraordinary within the ordinary.

The Dardennes scrutinize their characters and their unglamorous worlds with a rigorous energy and unblinking honesty, as L'Enfant unfolds against a backdrop of grim factories and anonymous urban sprawl. The takes are long, editing is minimal, music is non-existent, and the spare but nimble camerawork is hand-held and strictly fly-on-the-wall. It's a style (some might say anti-style) that can be a bit disorienting but gradually allows us to feel as if we're making the journey together with these characters, seeing the world roughly as they see it. If you can stand the heat, you may come away amazed.

Even if L'Enfant throws you for a loop — the movie is, after all, pretty much the polar opposite of everything Hollywood has taught us to expect or desire in our movies — you can reorient yourself by walking into the first theater where a screening of The Last Stand is almost certainly in progress.

Whether the new X-Men blockbuster is really the last installment in this profitable franchise remains to be seen. What is clear is that The Last Stand is what summer movies are all about. Filled with frenetic action, larger-than-life heroes and villains, and wall-to-wall special effects, it is as ornately overstuffed as L'Enfant is spare and spiky.

There are several new faces in this installment, and lots of characters with copious, spectacular new powers. We get mutants who can fly, walk through walls, create walls of fire and ice, conjure storms, read minds, transform into metal and, in one spectacular sequence, redirect the path of the Golden Gate Bridge.

There's plenty for geeks to gawk over but The Last Stand lacks the succinct pop poetry and — dare I say it? — the depth that director Bryan Singer brought to the first two installments (Brett Ratner is the new guy in charge here). Still, with a script and performances a half-notch above what we expect in our comic-book extravaganzas, this is a solid if somewhat workmanlike conclusion to the X trilogy.

The story this time out revolves around a newly discovered "cure" that turns mutants into ordinary humans — a discovery that forces the international mutant community to make some hard choices about who they are and who they want to be. This gives the movie plenty of room for not-so-thinly disguised messages about accepting one's self and others, but the whole mutant "cure" thingie is really just a Maguffin, a holy grail to be drooled over and chased after, not unlike the one currently on display in The Da Vinci Code.

Fortunately, The Last Stand does a considerably better job with this material, and by the time the film moves in for the kill with its final assault of battles, disasters, illusions and revelations, we're exhausted and overwhelmed in that blissful way that only the best popcorn movies can supply. It ain't L'Enfant, but you can sure dance to it.