The Ridgewood Park area, where Armature Works is located, is now 25% whiter than it was 30 years ago, and 42% less Black. 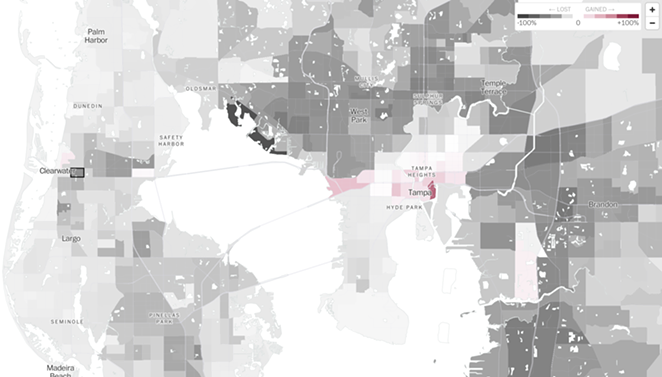 Image via Washington Post
The map show parts of Tampa Bay that saw an increase in over white populations (red), and also where white residents have left (black)

As a whole, newly released U.S. Census data shows that the United States is more diverse than ever, and this includes Tampa Bay. However, not every neighborhood can say the same, and a new map shows some incredibly drastic shifts in local racial compositions.

Using data from the 2020 Census, the Washington Post recently released an interactive map that allows users to see how their neighborhood’s diversity has changed since 1990.

According to the Post’s analysis, both Pinellas and Hillsborough County followed the national trend of becoming more diverse over the last 30 years, with the exception of the area’s wealthier districts.

As visible on the map, one of the Tampa Bay areas that experienced the most drastic racial changes is without a doubt Tampa’s Channelside District, a gentrified condo heap that witnessed a 70% increase in more white people, but is still ironically adjacent to the city’s last standing Black rooming house.

Unsurprisingly, parts of Tampa Heights are also dramatically less diverse. The Ridgewood Park area, where the colossal food hall Armature Works is located, is now 25% whiter than it was 30 years ago, and 42% less Black.

You’ll also notice a similar trend all up and down Tampa’s Kennedy Boulevard.

According to the data, some Tampa Bay neighborhoods experienced a large decrease in white residents, like areas near the Skyway Bridge ( a decrease of 39%), and parts of Clearwater (a decrease of 51%).

There's almost too much to unpack here, but you can check out the whole map, and your own neighborhood, here.