The cop let the pro-police Facebook user know when and where he could find Black Lives Matter Pasco protests. 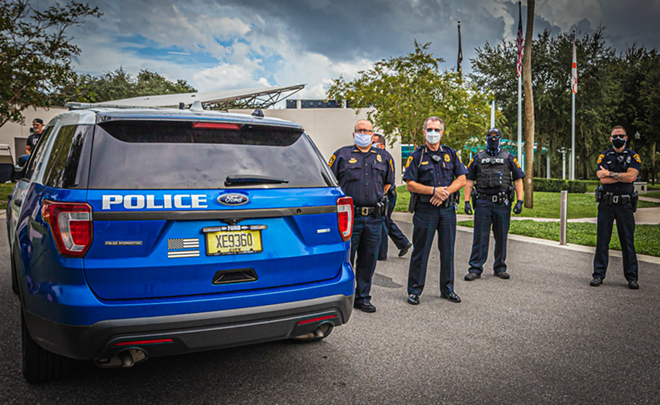 Dave Decker
Police officers stand by during a protest in New Port Richey, Florida on Aug. 23, 2020.

On Sept. 4, Facebook user Jason Guralny shared a picture of himself wearing military gear and multiple pistols, and posted, “So BLM is bringing a bunch of people to downtown NPR tonight??... Hold on, let me get dressed.” The caption included the hashtags #backtheblue, #notinourtown and #blackgunsmatter.

In the comments captured in screenshots and shared by Black Lives Matter Pasco County, Guralny made threats towards protesters.

“Yes, we’ve been watching the pathetic freaks for a while. But had info they were bringing more down from the Tampa area tonight. I could care less if they want to walk around looking like clowns,” Guralny wrote, “But pull out one can of spray paint or any acts of violence. And guarantee it will not be in their best interest. And will show other communities on how to handle domestic terrorists, as proud Americans.”

Guralny’s threats were made toward a protest that was scheduled for that night. However, the event was canceled, but former New Port Richey police officer Corey Oliver jumped in the comments to casually give the armed vigilante police information.

“They canceled for tonight but will be doing silent protest tomorrow per my departments intel,” Oliver wrote.

Another commenter asked “what department are you at!?” to which Guralny replied, “No, just a patriotic American. Standing up for our community and our law enforcement officers.” Oliver corrected Guralny, saying, “I think she was asking me lol I work at NPR PD as an officer now.”

When CL contacted NPR PD about the online exchange, Deputy Police Chief Lauren Letona wrote, “Corey Oliver is no longer employed with our agency.” When asked for details about why Oliver no longer worked for the department, Letona said she forwarded the query to police chief Kim Bogart, who did not respond. 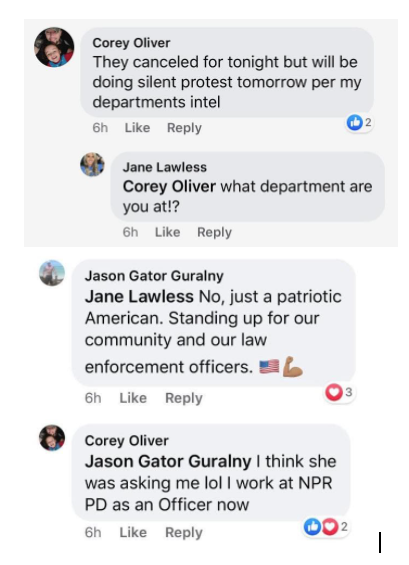 On Sept. 15, BLM Pasco activist Marlow Jones was removed from New Port Richey City Council chambers after going over his allotted three minutes for public comment as he tried to explain the problem surrounding police officers who give information to pro-police Facebook users.

Jones’ mic was turned off but he continued on, demanding an answer.

“Jones you are out of order!” Mayor Marlowe shouted while banging his gavel, “Please sit down.”

Jones continued on to discuss a picture of another officer posing in front of a confederate flag, and Marlowe called for him to be removed. Jones complied and walked out on his own behalf, with Marlowe adding, “Please have this man escorted off the property.”

Jones said that a member of BLM Pasco called the police to confirm whether Oliver was an officer with NPR PD. He says the department confirmed his status as an employee and that BLM Pasco informed the department of Oliver’s behavior.

Additionally, Jones and other BLM Pasco members have said they saw officers from NPR PD participating in a prayer circle with members of the SPLC-designated hate group “The Proud Boys” and have received fierce resistance from the police during protests.

Multiple BLM Pasco protesters have been cited for noise violations. Jones was arrested in July during a protest and charged with battery on a police officer and obstructing an officer without violence. He faces a third degree felony charge and could receive up to five years in prison. He’s currently fighting those charges, but they haven't stopped him from remaining active in the BLM movement.

“It always seems like the hate groups and the police are working in unison. The cops would come up to give us a noise citation and The Proud Boys and bikers would suddenly show up,” Jones told CL, “They never gave the other side citations even though they also had megaphones and were making noise. The Proud Boys threatened us and said we were lucky the police were there to protect us from them.”

BLM Pasco is concerned that NPR PD collaborates with dangerous, bigoted groups and argues that it’s worries are bolstered by actions like that of Corey Oliver. What’s more is that the St. Pete Cop Watch Facebook page claims that another officer posted pictures of herself on a boat with a Confederate flag. NPRPD confirmed to CL that the officer in question is still on the police force.

NPR PD recently told CL that local protests have caused zero dollars in property damage. Yet, the threats continue toward the peaceful, non-destructive protesters. In August, a person said that the protesters should be followed and that counter-protesters should, “Burn their house, burn their cars”. Jones has received death threats since his arrest.

“It really seems like they’re targeting Black Lives Matter leaders and our white allies as well,” Jones says, “It’s just getting really out of control.”