The chamber on Friday called the task-force process “a new way of deliberately planning for the population increases we know we are going to have.” 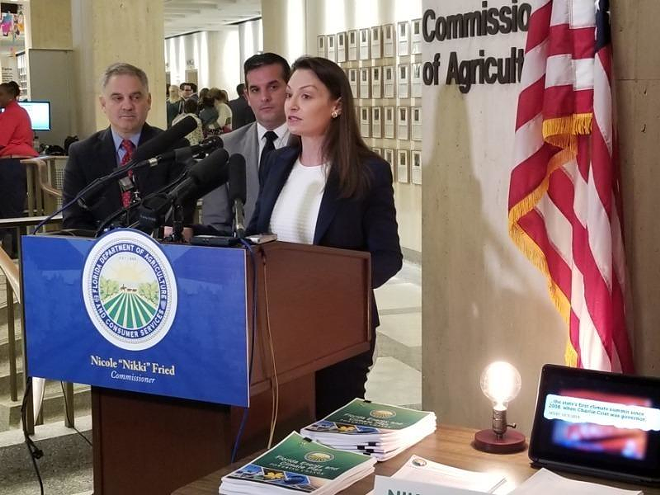 Agriculture Commissioner Nikki Fried wants the state to put the brakes on a series of controversial toll road projects as lawmakers face budget shortfalls caused by the coronavirus pandemic.

Three Department of Transportation task forces sent recommendations Thursday to lawmakers about the projects, including recommending a need for more economic and environmental-impact studies before the projects are built from Collier County in Southwest Florida to Jefferson County near the Georgia border.

Fried used the recommendations when she issued a statement late Friday saying the projects, which are projected to require up to $101.7 million a year, will “put an unnecessary strain on the state's ability to fund urgent priorities” amid the pandemic.

“Just as compelling are the effects these unnecessary toll roads will have on Florida's environment and agricultural lands, with the potential to destroy millions of acres of farmland, state forests, and wetlands in their paths,” Fried said in the statement. “This project threatens the unique character of our state’s rural lands and last undeveloped landscapes.”

Fried is the only statewide elected Democrat and has fed speculation that she’s interested in running for governor in 2022.

The projects --- dubbed Multi-use Corridors of Regional Economic Significance, or M-CORES --- would extend the Suncoast Parkway from Citrus County to Jefferson County, extend Florida’s Turnpike from Wildwood to connect with the Suncoast Parkway and create a new road linking Polk and Collier counties.

A top priority of outgoing Senate President Bill Galvano, R-Bradenton, the projects were approved in a bill signed into law by Gov. Ron DeSantis in 2019. The legislation anticipated construction beginning in January 2023 and being completed by 2030.

The task force reports suggested lawmakers direct the Department of Transportation to further determine if the roads would reduce congestion on Interstate 75; establish how the roads would be used for disaster evacuations and response; consider the economic pluses and minuses in shifting traffic into new rural regions; work with local governments so utility and broadband expansions meet existing policies about urban sprawl; and protect environmentally sensitive resources such as springs, wetlands, and floodplains in support of habitat conservation and water quality.

“The traffic analysis should also consider potential changes in travel demand related to the state’s recovery from the COVID-19 pandemic and potential long-term changes in travel behavior, such as greater propensity for working from home and increased home delivery of goods and services,” the report from the Northern Turnpike Connector Task Force said.

A similar sentiment was suggested by the other task forces that worked on the Suncoast Parkway extension and the new road known as the Southwest-Central Florida Connector, which would link Collier and Polk counties. Members of the Southwest-Central Florida Connector task force included the need to address habitat for endangered Florida panthers in their recommendations.

Environmentalists who have been critical of the review process were quick to note that the task force findings don’t point to an immediate need for the corridors.

The roads have been backed by groups such as the Florida Chamber of Commerce, Associated Industries of Florida, the Florida Ports Council and the Florida Trucking Association as a way to bring economic opportunity, along with utilities including broadband, to rural communities.

The chamber on Friday called the task-force process “a new way of deliberately planning for the population increases we know we are going to have.”

Fried acknowledged the need for long-range planning for economic development and the state’s growing population. But she said she was troubled by the “overwhelming lack of support, lack of demonstrated need, and the millions in general revenue diverted from a state budget facing economic shortfalls reminiscent of the Great Recession.”

With the pandemic causing massive damage to businesses and tax revenues, state economists have estimated lawmakers will be working with a potential budget shortfall of about $2.7 billion for the 2021-2022 fiscal year and $1.9 billion for the following budget year.

“Ultimately, I don't think the case has been made that M-CORES and this new section of turnpike is needed, and it has many negative potential impacts to a part of our state that is truly special,” said Hanrahan, who served on the Suncoast Parkway task force. “While these communities do need access to broadband, economic development, water and wastewater infrastructure, springs protection, trails, and many of the other promised benefits, a toll road is not a direct route to achieving these goals.”