This would be the equivalent to an average human choking on a Slim Jim the size of a fire hydrant. 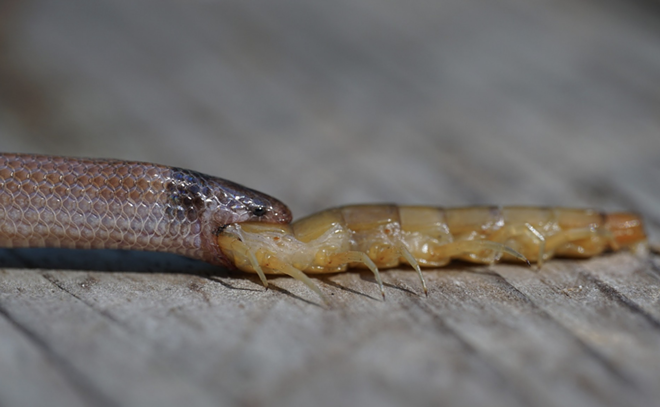 Photo by Drew Martin via Florida Museum of Natural History
Rim rock crowned snake, aka Florida's throat GOAT.
The literal rarest snake in North America hasn't been seen in over four years, until a Florida hiker came across a dead one that clearly bit off more than it could chew.

According to the Florida Museum of Natural History, a threatened rim rock crowned snake was recently discovered at Coral Reef State Park in Key Largo with a centipede stuck in its mouth.

The dead snake was brought to park staff, which then alerted the museum of the rare find. To discover the exact cause of death, and not destroy the specimen, researchers performed a digital CT scan and discovered that the girthiest part of the centipede was pinching off access to the snake's trachea.

In other words, the snake died of asphyxiation, after trying to swallow a meal that researchers say was at least a third its size. For some perspective, this would be the equivalent to an average human choking on a Slim Jim the size of a fire hydrant. An insanely constipated Florida lizard just broke the record for biggest poop: The turd was 80% of its body mass.

The discovery was recently published last Sunday in the journal Ecology, titled  "What killed the rarest snake in North America?"

"I was amazed when I first saw the photos," said co-author Coleman Sheehy, the Florida Museum herpetology collection manager.  "It’s extremely rare to find specimens that died while eating prey, and given how rare this species is, I would never have predicted finding something like this. We were all totally flabbergasted.”

The snake is now being preserved at the museum for future studies.

Experts believe the rim rock crowned snake is on the verge of extinction. Since 1975 the species has been listed as threatened in Florida, and there's currently an effort by the U.S. Fish and Wildlife Service to have the species federally protected, as well. "Outside of the Everglades, only 2% of the original pine rocklands remain," says the museum. "For animals endemic to pine rocklands, like [the rim rock crowned snake], the new cityscapes have meant near annihilation."

“We can't say for sure whether or not they're still present in peninsular Florida," said Sheehy. "Absence of evidence is not evidence of absence, but their habitat has basically been destroyed."