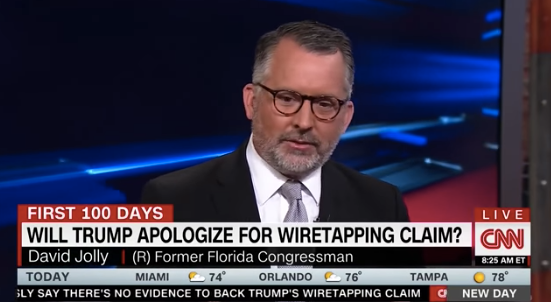 Former Congressman from Pinellas County David Jolly, a Republican, seems a little concerned that the president's understanding of how the federal government functions may be somewhat lacking.

During a Monday morning chat with CNN's Poppy Harlow as well as Republican Pennsylvania Senator/two-time presidential aspirant Rick Santorum, Jolly said Trump ought to apologize for a tweet accusing President Obama of wiretapping him during the campaign, a claim for which there is no evidence. (Not that he's the only Republicans to call on Trump to apologize.)

The infamous Trump tweet points to a bigger question, Jolly said, which is "whether not this president is intellectually qualified to be President of the United States." After all, for a sitting president to fire off a tweet accusing his predecessor of a felony with no evidence whatsoever is... well, typically not something a sitting president who understands what it means to be a sitting president would do.

Santorum, of course, disagreed again, and mistakenly called Jolly a leftist. (He's not.)

"That's just absurd. The President of the United States... This is what the left does. They always take a situation and then they go one step too far," Santorum said, adding the usual line about Trump being a brilliant, successful businessman (sure, one who totally would have done just as well if he hadn't inherited everything from his father or hired the right people to sort-of keep his businesses afloat).

A rare congressional moderate, Jolly was elected to Congress during a special election in 2014 to fill the seat of Republican Congressman Bill Young. In 2016, he was unseated by Democrat Charlie Crist.

Oddly, Florida's 13th — which, again, voted for Crist — went for Trump. Jolly didn't go out of his way to disavow his party's presidential pick once Trump became the nominee, but he had previously called on Trump to get out of the race over his proposal for a travel ban on Muslims, which has since morphed into attempts at public policy that courts have twice blocked. But he had an uphill battle, as he openly criticized the party machinery for making sitting members of Congress spend hours each day soliciting donations — and as a result didn't benefit from said party machinery.

It's rumored that Jolly may try to win his old seat back from Crist in 2018, which is an off-year that'll likely see a drop in Democratic turnout. Crist may be vulnerable, too, because someone saw him drink on a plane once or something.

With Monday's comments, it's clear that if there were a rematch, Trump would probably not be asked to stump for Jolly.