Oracle of Ybor: I hate the South, but I'm not sure if my partner is ready to leave

After lots of thought, your partner might decide to join you in this adventure. 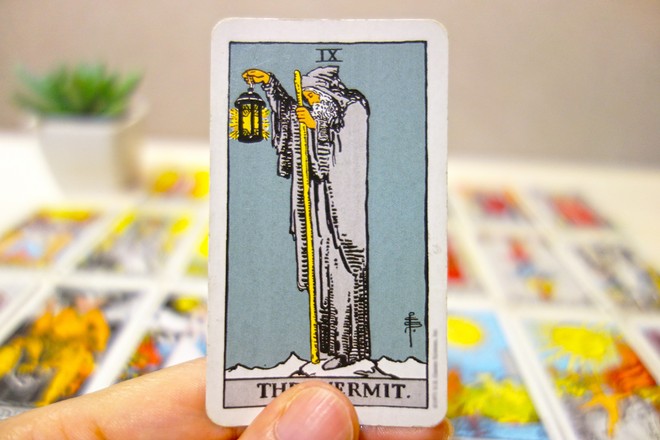 Photo via sf4041/Adobe
The Hermit shows that you know what your soul needs, and I encourage you to honor that.
I love my partner. I’m in love with my partner. But I hate it here. I hate the South and want to move. I’ve never been quiet about hating Florida and make jokes about leaving often. But I’m actually, seriously considering moving (either out of the country altogether or to a major city with more opportunities in general) in a couple of years, but I haven’t *truly* discussed this with my partner because I’m afraid they won’t come with me—and what’s the point of saying it now and maybe ruining things when I could wait? If I stay, I feel like I’ll grow to resent them for “keeping me here” but if I don’t it might be a solo move.—Caged Bird

Cards: Two of Wands, The Hermit, Two of Swords, The Fool (reveresed), The Knight of Cups, The King of Cups.

Dear Caged Bird, I doubt there’s a reader out there who has not been in your position at some point in their lives—loving someone and worried that somehow, saying a want out loud will jeopardize the whole relationship. I know I’ve been there.

I was debating on what kind of spread to pull for you because this wasn’t a typical “stay-or-go” situation. But, to me, it felt like the most pressing issue was that you haven’t told your partner your truest desire out of fear of losing them, so I drew cards for the conversation you haven’t had yet.


Send your questions for the Oracle to [email protected] or DM @theyboracle on Instagram
I know you want a future with your partner and that (to you) a move might jeopardize this. And I’ll be real with you: there’s a chance they might not want to move. Leaving your homeland—be it region or country—can be very difficult. It’s hard to move somewhere where you have no ties, or family, especially if you’re immigrating to a country and don’t speak the language. There are a lot of things to consider.

But that doesn’t mean you shouldn’t have the conversation because there’s a 50% chance they will want to ramble on with you.

I want to start with the last three cards of the spread: The Fool, The Knight of Cups, and The King of Cups. The Fool is a card of new beginnings, journeys, and general newness all around. The idea of you moving is “new” in the sense that nothing is in motion yet. It’s all theoretical, which can be a really fun place to start. I drew you as The Knight of Cups—a little more gung-ho, a get-shit-done kind of romantic partner—while your partner was The King of Cups reversed.
I don’t think your partner would do well with a spontaneous plan, like deciding to move to Chicago because you liked “The Bear.” Instead, I think your partner needs a minute to wrap their head around an idea, to give it some deep contemplation.

So start with asking if there’s anywhere they’ve wanted to travel to or visit. Plenty of couples go on vacation, fall in love with a place, and move house. Who knows? Maybe your partner has always wanted to see Scotland, and then next thing you know, you’re looking up real estate agents in Glasgow.

When you talk to your partner, tell them why you’re unhappy in the South, what your hopes are with a move. Then you need to really listen to their answers, whatever they may be. If they’re not down, don’t just make a joke about it and never bring it up again. Keep a level head (remember, this is all theoretical right now) and press them a bit on their objections. Are these deal breakers for them? Or are they milder concerns?

I also suggest doing a bit of objective soul-searching on why you want to leave the South. What specifically do you hate about it? What do you hope to gain by moving elsewhere?

I ask because I was a child of the South, born and reared and hated it, who left California at age 18 with zero intention of ever coming back to Dixie.

It turns out what I hated about “the South”—the racism, homophobia, casual sexism, Christian nationalism, anti-intellectualism—was just what I hated about America. All those issues existed in California too. (Plus a hella annoying sense of cultural superiority.)

So don’t be devastated if you see issues of the South showing up in other places in the Western World. But a new home might also give you things the South can’t, like universal health care or the option to wear a sweater in September.

Whatever those reasons are, know they’re important to you.

The Hermit shows that you know what your soul needs, and I encourage you to honor that. Because if you stay and grow resentful—a fear you named in your question—then that will dim your light and cause the love to wither. Then, it wasn’t a choice to ‘save’ the relationship or not. It was to end it quickly or prolong it.

The idea of moving is not necessarily a death blow to the relationship. After lots of thought, your partner might decide to join you in this adventure.

But even if the worst-case scenario happens and you bring up a wish for the future, and your partner breaks up with you, you still did right by you. You know what you need, and as dark as those feelings might be, the light of The Hermit’s lantern can guide you home, wherever that may be.