You can’t hobby your way out of existential longing. 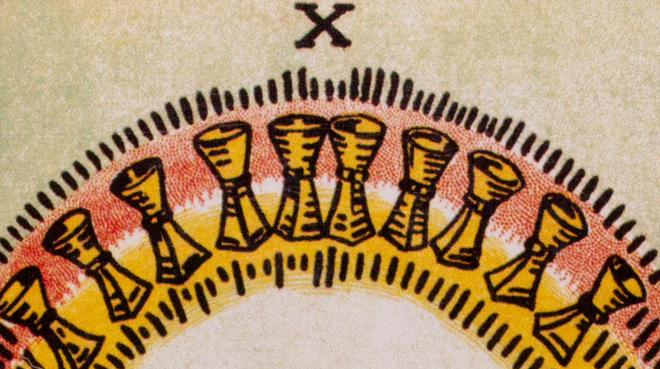 Photo via upsidedowncake/Adobe
Identity is astoundingly important, and to lose it is a heavy burden, which we see here in the Ten of Wands.
Dear Oracle, I’m a mom of three kids all under four years old. I had to give up my career to become a stay-at-home mom, and while I love my babies, I miss me. I feel lost, and like I’ll never achieve a purpose other than Mothering. Will I ever find my path to happiness?—More Than A Mother

Cards: Ten of Wands (reversed), The Seeker, The Star, Temperance

Dear More, yours is an old problem, one felt by countless mothers that came before you. In 1963, Berry Freidman called it “the problem that has no name” in her book The Feminine Mystique and described how women are dismissed or shamed if they voice their concerns that they feel like something is missing in their life and that something is themselves.

Identity is not a trivial thing. The questions “Who am I?” and “What is my purpose?” are how we ended up with philosophy, religion, psychology, and culture as a whole. It is astoundingly important, and to lose it is a heavy burden, which we see here in the Ten of Wands.

Being reversed, I suspect you’ve felt lost for some time now, but with The Seeker, it’s clear that you’re trying to find yourself again. This might be a long journey, but you know it’s an important one.


Send your questions for the Oracle to [email protected] or DM @theyboracle on Instagram
I can’t offer a lot of specifics about how to come back to yourself. I won’t tell you to join a book club or take up painting because that’s superficial. You can’t hobby your way out of existential longing.

I will, of course, recommend therapy and suggest that you specifically seek out a therapist who’s also a mother. But the two other cards do offer some guidance.

Identity is two-pronged; it’s both who we are alone and who we are to others, and this shows up in both The Star and Temperance.

The Star shows a woman pouring water on the land (the conscious) and the sea (the unconscious). We have to have a rich inner world to give to the outer, and that comes from feeding the imagination... which often requires us to be mindfully alone. I don’t mean going on a Target run by your lonesome. I mean taking a walk for an hour without any music and letting yourself be curious.

I know asking a mother of three tiny children to be alone is a tall order, but it might also be the only way to hear yourself think.

Temperance is also a card about balance, but more so about reciprocity. Temperance is an earthy mama who gives herself to the world, and the world happily gives itself back.

You spend most of your days with your children. That relationship isn’t reciprocal because 1.) it’s never the child’s job to be the emotional confidant of the parent, and 2.) they’re literally babies who need you to survive. That playing field will never be even—nor should it!

What you need are other adults who can give back to you emotionally, intellectually, and (for lack of a better term) spiritually. You need relationships that make you feel like “you” in the most authentic way. This might be social and involve your pre-motherhood friendships. This might be artistic and involve a creative community.

Or it might be work. This might be solved if you return to your career. With the lack of affordable childcare in this county, that might be financially impossible, but I think it’s worth having that conversation with your partner.

While I can’t tell you what your path to happiness will be, I do think you’ll find it. It takes strength to look for something more, and I believe that strength will carry you home to yourself.

Dear Oracle, I’ve been with my Capricorn BF for almost five years. He’s my best friend but doesn’t always feel like a lover. The thought of being without him feels lonely but also liberating. Please help.—A Leo Stuck in A Paradox

Cards: Seven of Wands, Six of Cups, Two of Pentacles

Dear Leo, there’s often a false dichotomy in love stories: a relationship can either be safe, stable, and dull, or it can be fiery, passionate, and dramatic.

This is, of course, untrue. If Gomez and Morticia Addams taught us anything, it’s that it’s possible to have a stable, loving home where you can still tango ’til you’re sore.

Judging by the cards and your question, I’d say the relationship is pretty stable. Two of Pentacles is a multitasking dream. Money is good, there’s balance in the home, things are going “well.”

Then we have the safe haven Six of Cups, a nostalgic and childlike place of love and security. Five years is a long time to be with someone, and you two probably “grew up” while together. (You certainly went through a global pandemic together.)

Seeing these two cards together, I’d venture that everything in the relationship is “fine.” It’s nice. If it were a utensil, it’d be a spoon.

But that doesn’t mean you’re happy. Seven of Wands is a turning point; even if there’s not a glaring problem, something needs to change.

This does not necessarily mean you two should break up, but it does mean that you should be honest with yourself about your wants and desires. You mention that Capricorn is your best friend but not always “a lover.” Do you want a more passionate relationship? What would that look like? What are some of Cap’s desires for the relationship?

The only way to figure out if you two are dancing to the same beat is to talk, either by yourselves or with a therapist. Who knows? Cap might want the same things you do, and your relationship can grow in an exciting new direction.

Or… he might not. You might end up parting ways. People can grow to want different things, and that isn’t anyone’s fault. It just happens.

Before you decide anything, talk and listen.

Whatever happens, dear Leo, I wish you a future with love, happiness, and plenty of tango.