Oracle of Ybor: There is a Santa Claus, and a Holly King, Krampus and Turoń, too 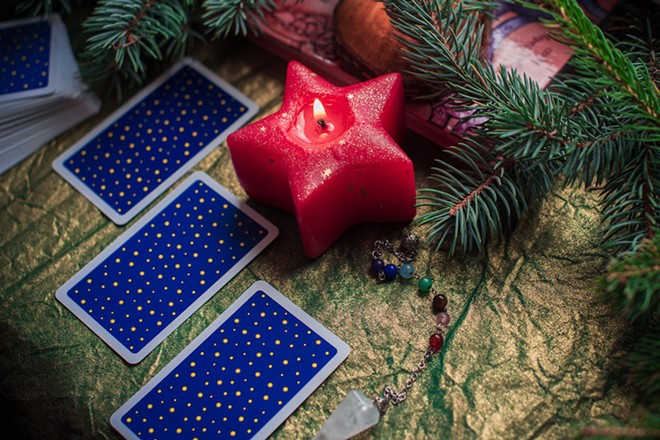 Adobe
Dear Oracle, I’m traveling to New York City with my boyfriend of three months for Christmas! Although I am very excited to share this magical time in a city I love with a man that I have fallen in love with, I am nervous about going. Would you be able to give me some tarot guidance and insight on the upcoming magical trip? Fingers crossed—Nervous for NYC

Cards: Eight of Swords, Ten of Pentacles reversed, The World, Eight of Cups
Dear NYC, Short answer: I think the trip will go well. Long answer: I think this trip will be healing for you and deepen your relationship. The first card in the spread is Eight of Swords, which can be a card of all the negative self-thoughts and feeling hemmed in. In a relationship spread, it can feel like you’re trapped.

Send your questions to [email protected] or DM @theyboracle on Instagram.

However, in this spread, I wonder if you feel like you’ve “trapped” your boyfriend somehow and that you don’t deserve to feel love.

The Ten of Pentacles is a card about family and can be the stage where we play out the stories we believe about our family lives. If it’s a negative story, it can feel like we’ll always be cast to play that role.

I wonder if you have a past where you felt either rejected or abandoned by family or put into situations where you felt like you had to earn your love. If you were, I am deeply sorry. Children should never have to believe that—and neither should the adults they become.

But those negative self-thoughts don’t have to last. We do have the Eight of Cups, which is walking away from what you’ve known. In this case, I think the two Eights speak to each other. You can abandon this idea that you aren’t good enough, that you’ve somehow tricked your boyfriend into being with you.

We have The World smack-dab in the middle of this spread; it’s a card of Anima Mundi—“the world soul”—and is the card of interconnection and creation. This interconnection lets us see two contradictory things as one—for example, the need for change and the need for self-acceptance. You can love yourself, be kind to yourself, and understand where you came from and why you feel the way you do, but you can also move towards a different self-image, one of a person who deserves love.

The World is very much a card of rejuvenation and allows us to be reborn in a sense. It can be this spark that leads to a new chapter in your life—one where you can feel on equal footing in love and be able to pursue this relationship (and every relationship, romantic and platonic) without this lingering doubt there. Best of luck, my dear. I hope you have a wonderful trip.

Dear Oracle, due to various factors, I won’t be able to see my family this year, and I’m having a hard time feeling festive because of it. I’ve only ever spent Christmas alone one other time, and that was pretty depressing. So is there any way to get into the Yule-tide spirit while being alone in sunny, hot Florida?—Blue Christmas

Cards: Six of Cups, Six of Pentacles, Queen of Wands
Dear Blue, I think there is a two-pronged approach to getting you into the festive spirit. First, we have the Six of Cups, which is a card of nostalgia, particularly of childhood. What were your family traditions growing up that put you in the mood? Singing carols? Baking family recipes? Watching a specific movie? See if you can find a couple of things and try to do them mindfully. Maybe bake the same recipe over zoom with your sister or watch ”Die Hard” with your dad.

The second approach is to get into the giving spirit. The Six of Pentacles is often a card for charity, and The Queen of Wands is a warm and giving person who also got a bit of a mama bear streak. Who could use some generosity and warmth? It might be someone in your life; it might be strangers. If you’ve never volunteered before, it can feel a little daunting to know where to start. But, trust me, organizations know how to put people to work, so pick an organization you’d like to help and reach out to see what they need.

Also, check-in with people in your own life. Maybe your elderly neighbor could use a hand with Christmas lights, or your new-parents friends could use some babysitting, or your teenage cousin needs someone to vent to. Community, generosity, and being a light in the dark is what the holiday season is about, and helping others might also help you with your Christmas blues.

Dear Oracle, is there a Santa Claus?—Virginia

Yes, Virginia, there is. There’s also a whole slew of other Yule-tide spirits. There’s The Holly King, who slew the sun-bringing Oak King and plunged the World into darkness. He’s at the height of his dark power on the winter solstice and, in some Wiccan households, is the bringer of gifts to many little witchlings during Yule.

Of course, there’s also big boy Krampus, who haunts the Alpine region and beats naughty kids with a switch while reigning mischief on villagers. There’s also Turoń, a terrifying Polish folk spirit who hits people with his large, dislocated skeleton jaw, but also uses it like a castanet to keep rhythm to Christmas carols.

Baby Yaga haunts the wintery woods of Russia, moving along on her mortar and pestle. At the same time, over in Scotland and Ireland, Cailleach Bhéara was the harsh mistress of winter and wolves.

What I’m saying is there are plenty of midwinter beings to delight and terrify you if you want to believe.