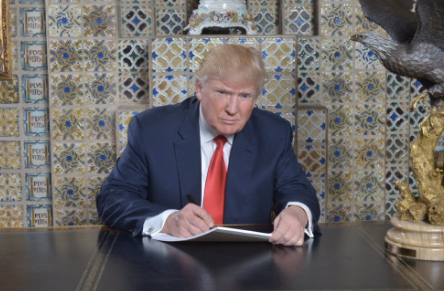 They're some of the possibilities Irish betting website Paddy Power is listing for Trump's possible Inauguration Day skin tone.

Trump, the soon-to-be 45th president, will be sworn in at roughly noon on Friday. In addition to wagers on the color of Trump's tie (red is the favorite thus far, with 4/11 odds), which celebrities are likely to make surprise appearances and when/whether he'll say "make America great again" during his speech (which he "wrote" himself!), they're also taking bets on how orange Trump will be.

So far, "tiger's eye" and "deep saffron" are the favorites, each with six-to-one odds.

Mahogany and burnt orange appear to have the lowest chances, with each at 18-to-one.

Of course, the tone of his skin will also depend on time of day, cloud cover and the color he's wearing.

Those who are wagering on a more muted tone may have better luck.

Although Trump typically sports a neon apricot, a recent photo of himself he tweeted out on Wednesday shows a side of the president-elect (a term we're going to milk the shit out of until his reign officially begins) we rarely see: he appears to be pasty and feigning deep thought. Supposedly he was "writing" his inauguration speech at Mar-a-Lago, his Palm Beach mansion. He had a notebook and everything! And he looked so deep in thought! And a little like Steve McCroskey (Lloyd Bridges' character in Airplane. You know: 'looks like I picked the wrong week to quit sniffing glue.' Us, too, man).

Gamblers are also betting on whether he'll serve a full four-year term (odds are seven-to-four), whether he'll be impeached in his first six months in office (four-to-one) and what his first state visit will be (oddsmakers say Russia, 11-to-10).