Whitley fails to understand that a symbol’s origin doesn’t define it forever. 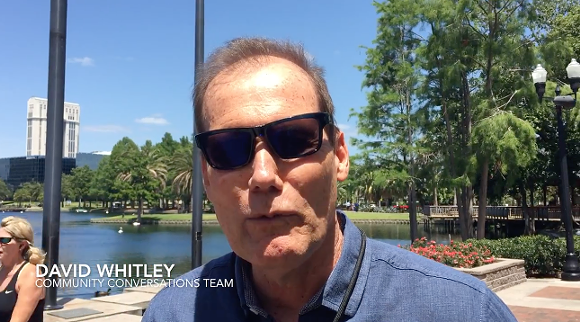 This morning, the Orlando Sentinel’s veteran columnist and resident dog whistler, David Whitley, laid out an astonishing argument on why people should continue to use a hand gesture that has been co-opted by white supremacists.

Whitley is not immune to horrible takes. After all, this is the author behind thinkpieces like “My day wearing a MAGA hat” and "Is it too much to ask breastfeeding women to cover up?”

But today’s column truly is a jumbled word cloud of boomer buzzwords and seering privilege.

In the piece, titled “How did the good old ‘OK’ sign become a hate symbol?,” Whitley ponders why Universal Orlando recently fired an employee for flashing the OK gesture in a photo with a little Black girl, while hardly touching on the reasons why the Anti-Defamation League labeled it a hate symbol in the first place or the fact that it’s regularly used by literal Klansmen, alt-right spokesman Richard Spencer, and far-right groups like the Proud Boys and Patriot Prayer.

“It’s not acceptable for a theme park employee to flash a sign that rightly upsets guests,” says Whitley. “But it’s also not acceptable when a symbol that’s served humanity well for thousands of years can get ruined in 24 months.” Nonetheless, Whitley bemoans the loss, and blames “the internet and the public’s hair-trigger reaction to all things race,” rather than say, white supremacists.

He then argues that the symbol is perfectly fine because, well, scuba divers and referees use it, and it has a positive history. “There are statues of Buddha giving an OK-like sign (it’s actually the Vitarka Mudra symbol) dating back to the 600 B.C,” says Whitley. “It was Martin Van Buren’s unofficial 1840 campaign slogan, since his nickname was Old Kinderhook.”

Being the historian he is, you have to wonder if Whitley purposely left out any mention of the swastika, which also had a positive history. Until the 1930s, the swastika was, among other things, a Sanskrit symbol for good luck, but then a failed art student named Adolf came along, flipped it, and “ruined” it for everybody.

While Whitley rightfully points out that the recent co-opting of the OK hand gesture started as a hoax in the bowels of the message boards of 4Chan, he fails to understand that a symbol’s origin doesn’t define it forever.

Unlike Whitley’s brain, meanings evolve, especially when a gunman flashes the OK sign after shooting up an entire mosque in New Zealand. “The hoax was such a hit that real white supremacists joined in, most notably the gunman who killed 51 Muslim worshipers at a New Zealand mosque,” says Whitley, keenly unaware that he’s actually answered the question in his column's asinine headline.

Your “good old” hand gesture, David, died when a terrorist used it. That’s what happened.

Oddly, Whitley also never mentions that with fingers pointing downward, the hand signal shows the letters “W” and “P,” which represent “white power.” This is a pretty important detail.

But regardless if it’s used by neo-Nazis or online trolls, the OK sign will continue to have dark undertones whether columnists like Whitley want to admit it or not.

“While the people who flash the sign can always readily claim innocence of any racist intent by attesting that they 'only meant it ironically' and that their real purpose was to anger liberals, minorities and “social justice warriors (SJWs),” says the Southern Poverty Law Center, “they can’t so readily escape ethical culpability for their role in the spread of hateful ideologies and their effects, including a global spike in hate crimes. Nor can they blame members of the minority groups who reasonably find such hand signals potentially threatening for being upset.”

Of course, none of this stopped Whitley from ending this trainwreck of a column with a call to action from his readers to continue to use a symbol of white supremacy that the rest of society will certainly leave in the trash.

“If someone accuses you of using a hate symbol, tell them they’re right, says Whitley. “Flashing an OK” sign shows that you hate how easy it’s become to accuse people of hatred.”