“We’re going to fight inflation by fueling inflation with stimulus checks, regardless of who you’re sending them to,” McDowell said. “Again, that’s pandering.” 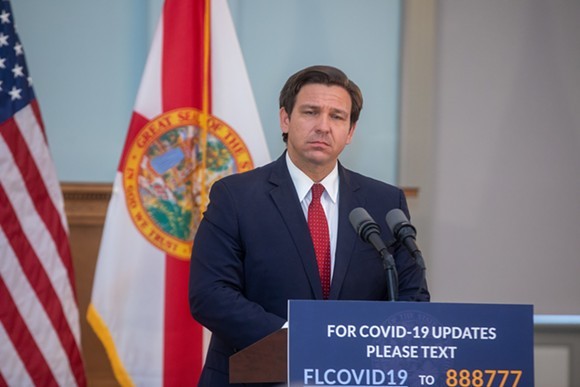 Photo courtesy Governor's Press Office
The Fox News Channel and sister networks have offered glowing coverage of Gov. Ron DeSantis since he was in Congress, but it’s not all huzzahs and hosannas.

McDowell, the fill-in host for Monday’s “Mornings with Maria,” said DeSantis “is sending stimulus checks to lower-income Floridians, which again is a level of moronacy that you see out of Gavin Newsom.”

Ouch. ⁦@dagenmcdowell⁩ goes after “pandering” ⁦@GovRonDeSantis⁩ and accuses him of “moronacy” and driving inflation with stimulus checks to low income families. Looks like the gloves are coming off re: Americas Governor. pic.twitter.com/TRc9MhD9cO


“We’re going to fight inflation by fueling inflation with stimulus checks, regardless of who you’re sending them to,” McDowell said. “Again, that’s pandering.”

When this author spotlighted the commentary on Twitter, McDowell doubled-down on the use of “moronacy” and the Newsom comp.

“I said the same thing about Newsom,” McDowell tweeted. “Let’s fight inflation by fomenting it? That is moronacy.”

First Lady Casey DeSantis rolled out the spending this summer, saying the Governor’s Office was “making sure that we’re doing everything we can on behalf of Florida families … so $35 million within that budget will then go to support our foster and adoptive families — our single moms across the state — so they will get a one-time payment of $450.” Suggested spending of the money included buying diapers and gas.

The Governor’s Office responded on Twitter to McDowell and to questions posed by this outlet, offering correctives to the narrative she promulgated on national television.

He tweeted, “1) the payments were specifically for foster care families, 2) the $$ was repurposed federal dollars that would have to be utilized or lost to (Joe) Biden (wasted), 3) states don’t cause inflation — the fed printing $$ did,” Griffin wrote.

“Even though this Fox Business correspondent is clearly mistaken about the cause of inflation, she’s entitled to express her own opinion. Unlike the partisan ‘mainstream’ media and liberal politicians, we do not expect any media outlet to act as an extension of the governor’s press office,” Pushaw contended.

Neither Griffin nor Pushaw responded to or matched the tone of McDowell’s polemic.

DeSantis has said in the past that his administration has discretion as to how to deploy federal pandemic relief dollars.

“We got this money dumped,” DeSantis noted in March. “I could have just spent it and said it was emergency spending.”

The Governor’s Office and political operation have had a friendly relationship with Fox News properties.

The prime time Fox News shows gave DeSantis an invaluable platform during the 2018 Governor’s race, and since elected, the platform has offered dozens of largely uncritical interviews where the Governor has encountered little pushback from his questioners.

For now, it seems that at least officially, the DeSantis operation is unfazed by this example of more aggressive coverage from the Fox family.