In March, free parking in Ybor was slashed by 26%. Now the city is reaping the benefits. 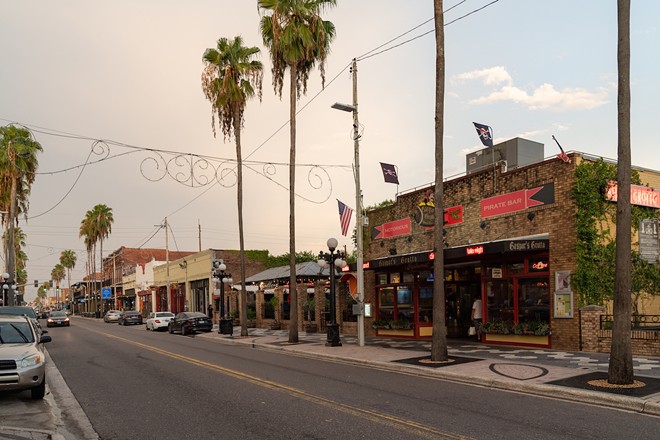 After Ybor City's free street parking was removed three months ago, the total number of parking citations has skyrocketed in the district.

The removal of free two-hour street parking on March 14 slashed overall free parking in Ybor by 26%, a move which is now paying off for the city.

According to city records obtained by Creative Loafing Tampa Bay, there's been a slightly more than 50% increase in overall parking citations issued since the change.


Here's how we got these numbers:


The citations are for a variety of infractions, including parking in freight or reserved spots, or not paying the parking rate at all. CL made its public records request on May 27, so May's total number of citations were not in the city's calculations.

The number of monthly visitors in Ybor City fluctuates with the seasons, but the steep increase in citations still has Tom DeGeorge , owner of Crowbar live music venue, worried.

He has been vocal about how the reduction of free parking could hurt the district and says that the increase in tickets is evidence of the harm.

"I think it's obvious that people aren't as willing to go eat and play in an area after they get a parking ticket there," DeGeorge tells CL. "I think it's definitely hurt our lunch crowd, and over time, it's going to hurt our nighttime business more and more."

In March, the city said that part of the reasoning behind removing the free street parking was to help ease traffic in the area. Ybor City parking changes will slash free spaces by 26 percent, causing concern from some: The city says the change, which goes into effect on March 14, will relieve traffic congestion.

“This is going to be instrumental in stopping the constant traffic congestion Ybor City drivers are facing as drivers scan the streets for free parking,” wrote Fednet Revolte, Parking Manager for the City of Tampa. “We know this will make it easier to find a parking spot and also provide additional free parking in our city-owned parking lots.”

But the free city owned lots don't have as many spaces as the street parking, which means that overall free Ybor parking has been reduced drastically.

Revolte focused on the supposed upside though, and estimated the project could reduce traffic congestion in the Ybor Business District by as much as 30%.

"I haven't seen it," says DeGeorge of the traffic reduction.

The City of Tampa's communications team said that the info on how the changes might have affected congestion in the area aren't available yet.

"As [far as] data on how the changes are working, we do not have official numbers yet," the city wrote in an email. "However, the City of Tampa is planning on conducting a city-wide parking study that will assess traffic congestion, best practices for paid parking and more. We are aiming to begin that study sometime in the next year."

In regard to the increase in tickets, the city wrote that, "The increased enforcement is expected the first few months to ensure people are parking per the new policy."

The city said that the parking changes are part of a strategy for long-term growth and follows best practices reiterated by sources including the Federal Highway Administration and Metropolitan Area Planning Council. The revenue from parking will be reinvested in mobility improvements in the area, including funding operations for the streetcar, the city wrote.

The City of Tampa’s Parking Division will be meeting with community members at the next Ybor CRA and YCDC Board Monthly Meeting on Tuesday, June 28 at 4 p.m. to discuss the issue.

DeGeorge said that because of Tampa's lack of reliable public transportation, people are still driving to the district—and if they're not, they're using Uber or Lyft, which contributes to congestion on the street.

"People coming to Ybor aren't just coming from the Channel District and downtown, where the trolley runs," DeGeorge said. "They come from all around Tampa Bay, and for better or worse in this area, that usually requires a car."

He thinks the changes are intentional. Beyond making the city more money off of tickets, DeGeorge says that the parking situation only hurts small business owners and workers in the area, while benefiting big monied interests.

"I'm trying to tell people that there's a process that you see with developers and areas they are gentrifying," DeGeorge said. "When things get squeezed in an area and completely broken down for the people who are there, then it's easier for developers to build the area back up, with their vision of what it should be."