Paul Pelosi is expected to recover, but American democracy might not 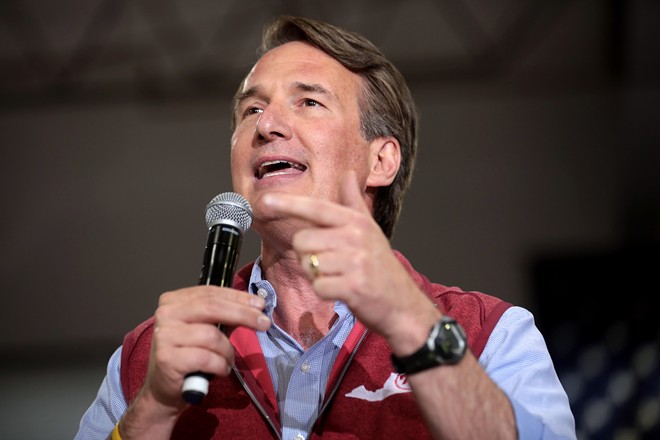 Gage Skidmore from Peoria, AZ, United States of America / CC BY-SA (https://creativecommons.org/licenses/by-sa/2.0)
After the attack on Paul Pelosi, Virginia’s 'mainstream' Republican governor, Glenn Youngkin, “joked”: 'There’s no room for violence anywhere, but we’re going to send her back to be with him in California.'
Early Friday morning, a 42-year-old former nudist turned QAnon freak named David DePape—who, as the Los Angeles Times delicately put it, had “been drifting further into the world of far-right conspiracies, anti-Semitism, and hate”—allegedly broke into House Speaker Nancy Pelosi’s San Francisco home and, after yelling, “Where is Nancy?” and “Where are you, Nancy?,” beat her 82-year-old husband, Paul Pelosi, in the head with a hammer in front of police officers responding to a 911 call.

The New York Times noted that “[DePape’s] words were eerily similar to the threats made against Ms. Pelosi as a mob loyal to former President Donald J. Trump stormed the Capitol on Jan. 6, 2021, breaking into her office as her staff barricaded themselves in an interior room. ‘Where are you, Nancy? We’re looking for you!’ one man shouted that day, as the mob rampaged through the building.”

Since Labor Day, Republicans have spent $37 million on ads demonizing Nancy Pelosi—more than on ads that mention immigration and only slightly behind crime—the latest in a decade-long campaign to turn her name into a slur. U.S. Rep. Marjorie Taylor Greene has called for Pelosi’s execution, and Republicans still embrace her. After the attack on Paul Pelosi, Virginia’s “mainstream” Republican governor, Glenn Youngkin, “joked”: “There’s no room for violence anywhere, but we’re going to send her back to be with him in California.”

It’s not just Pelosi. Since 2016, threats against members of Congress have risen 10-fold. Last year, U.S. Rep. Paul Gosar tweeted an anime video of him murdering Alexandria Ocasio-Cortez; Republican leaders assured everyone it was a joke. The same day Paul Pelosi was attacked, the Department of Justice announced that a Pennsylvania man had pleaded guilty to threatening to kill Rep. Eric Swalwell, who represents a Bay Area district adjacent to Nancy Pelosi’s.

Also on Friday, a federal judge appointed by Donald Trump allowed masked nutcases who are armed to the teeth, wearing ballistic vests, and high on Dinesh D’Souza’s “2,000 Mules” fantasy to continue “monitoring” ballot drop boxes in Maricopa County—and taking photos of voters and following them as they leave—because he couldn’t find “evidence that Defendants’ conduct constitutes a true threat.”

After undergoing surgery for a skull fracture, Paul Pelosi is expected to recover. But I’m increasingly worried that American democracy might not. It’s not just this incident. Our institutions don’t know how to deal with political violence. And once the proverbial bullet can do for the far right what the ballot cannot, we are—for lack of a better word—fucked.

Paul Pelosi is expected to recover. But I’m increasingly worried that American democracy might not.

A similar spark lit the Civil War 160 years ago: White Southern wealth built on human bondage feared democracy, so white Southerners sought to destroy democratic institutions. Today, the beneficiaries of racial and class privilege see pluralistic democracy as a threat and right-wing populism as a solution.

The stabs at both-sidesing the attempted assassination of the woman second in the line to the presidency were predictable enough, whether it’s The New York Times exploring a nonsequitur to call San Francisco “a city awash in crises over crime and disorder in the streets,” or the Associated Press reminding readers, apropos nothing, that “the United States has experienced spasms of political violence” throughout its history” and “no party or ideology has a monopoly on [political violence].”

It is true, as the AP reported, that in 2017, a Bernie Sanders supporter shot and nearly killed U.S. Rep. Steve Scalise, a high-ranking Louisiana Republican. It’s true, too, that a guy planned to shoot Brett Kavanaugh earlier this year but turned himself in instead of going through with it.

But there’s a difference. As former George W. Bush speechwriter David Frum pointed out in The Atlantic, although both parties “suffer political violence, the same cannot be said of those who celebrate political violence.”

“You don’t see Democratic House members wielding weapons in videos and threatening to shoot candidates who want to cut capital-gains taxes or slow the growth of Medicare,” Frum continued. “Democratic candidates for Senate do not post video fantasies of hunting and executing political rivals, or of using a firearm to discipline their children’s romantic partners. It’s not because of Democratic members that Speaker Nancy Pelosi installed metal detectors to bar firearms from the floor of the House. No Democratic equivalent exists of Donald Trump, who regularly praises and encourages violence as a normal tool of politics.”

After the assault on Paul Pelosi, Fox News did predictable wind sprints to distance its hosts’ rantings from listeners who act on them—even as the Fox network has aired racist ads from Trump administration goon Stephen Miller during Major League Baseball playoff games.

But the truly ghoulish part was seeing new Twitter leader Elon Musk—having just promised to use the platform to counter echo chambers that “that generate more hate and divide our society”—boost a homophobic and obviously false conspiracy theory about the Pelosis from a known progenitor of right-wing bullshit. As much harm as Facebook did by helping to elect Trump, a Musk-run Twitter that promotes paranoia and bigotry under the banner of free speech could prove much more damaging.

A large and growing swath of a major political party has deemed violence an acceptable means to achieve its political ends and overcome political adversaries. Giving the enablers of this violence power next week will only make the violence worse.

As if to prove my point, as I was finishing this column on Sunday night, I received some fan mail from someone calling themselves Nina Jankowicz: “Red wave coming fucko, nothing you could do except hide because we are going to massacre you brownshirts for what you tried and failed to do, woke faggots. Recriminations on the way, yeehaw!”