DeSantis, in a one-on-one interview with CBS 4’s Jim DeFede, rejected Monday the proposition that he was “tethered” to the President. 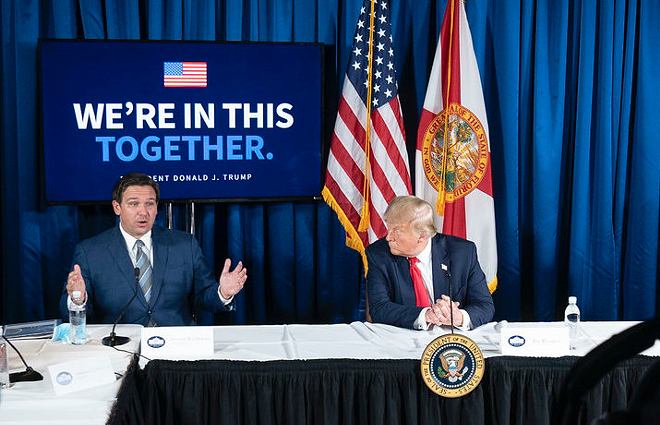 The persistent perception is that Gov. Ron DeSantis is simply Donald Trump‘s man in Tallahassee, but the Governor says that’s a “phony narrative.”

DeSantis, in a one-on-one interview with CBS 4’s Jim DeFede, rejected Monday the proposition that he was “tethered” to the President.

“First of all, that’s just a phony narrative,” DeSantis said.

The Governor continued to express angst in the interview about news coverage, saying “everything that’s presented typically is presented negative.”

Whether that coverage has affected polling is an open question. Though public surveys say DeSantis is down, with people soured on the Governor’s virus response, he says he hasn’t conducted any internal polling to find out.

“I’ve not taken a poll since I’ve been Governor, believe it or not. So I don’t care about them,” DeSantis told DeFede.

“As a leader, you got to do … you’ve got to lead. And particularly at a time when there’s a lot of fear and apprehension, obviously, it’s being driven in certain directions. There’s a lot of partisanship.”

DeSantis did describe the White House as a “great ally” in the fight against the coronavirus.

“I will say that they’ve been a great ally for Florida. I mean, when we’ve needed help. So, for example, some of the hospitals are running low on the remdesivir, which is a therapeutic, because, you know, we had a lot of hospital admission a couple of weeks ago. And there’s a big bureaucratic process involved with that. I was able to pick up the phone, call the President, say, ‘Mr. President, I know they’re supposed to come a week from now. I need it in three days.’ And guess what? They showed up in three days.”

However, it’s not coordination with the White House that will be remembered ultimately from the Governor’s virus response as much as the political aspect. One infamous moment occurred in May when DeSantis, standing with Vice President Mike Pence, essentially declared victory.

“You’ve got a lot of people in your profession who wax poetically for weeks and weeks about how Florida was going to be just like New York,” he said. “Well, hell, we’re eight weeks away from that and it hasn’t happened.”

DeSantis added that “people just don’t want to recognize our success because it challenges their narrative.”

When pressed by DeFede on the soundbite, the Governor was defensive.

In the spring, DeSantis tailored much of his virus response to conservative media, with sympathetic ears everywhere from the Fox News Channel to the Clay Travis Show, with blasts galore at the “Acela Media.”

It will be worth watching to see if more local one-on-ones are ceded to state television reporters instead of those national hits in the wake of a seeming recalibration of message strategy.