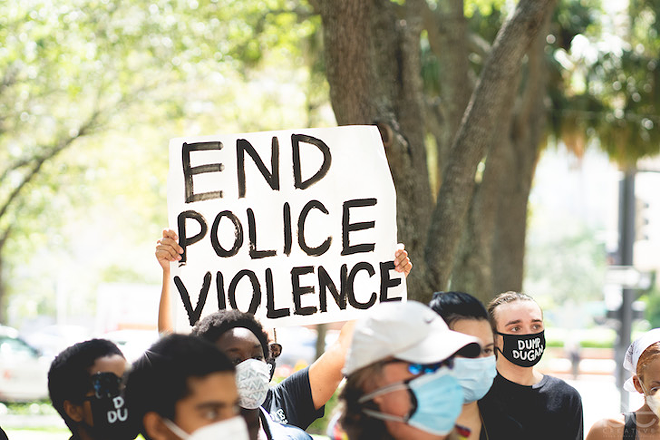 Last Friday, 31-year old Sadie Dean was arrested by Pinellas sheriff deputies (PSCO) at her home in St Petersburg, in the latest development of what appears to be a pattern of Tampa Bay law enforcement targeting Black Lives Matter activists for arrest.

Dean—who was released on bond on the same day sheriffs took her in—was arrested on two charges of battery (misdemeanor) and false imprisonment (felony) for an incident that occurred during a June 27 “No Dugan, No KKK, No Racist Tampa Bay” protest in Hyde Park Village.

According to Bernice Lauredan, a For Our Future community organizer and member of Dream Defenders, Dean was “bruised and mistreated” during Friday’s arrest by PSCO. Lauredan told CL that, in making the arrest, law enforcement purposely misled Dean by posing as building maintenance in order to trick her into opening the door even though they had a warrant for her arrest. Dean’s attorney, Oropesa, confirmed she’d received a similar account from Dean regarding mistreatment during her arrest and the nature in which PSCO approached her.

“They used somebody to, posing as a maintenance guy to get her to open her door, and then they pulled her out,” Oropesa said. According to Dean’s account, shared with Oropesa, Dean was also not fully clothed at the time of her arrest. She told her attorney that the PSCO officers did not allow her to fully dress herself before forcibly removing her from her home.

“That is disturbing to me,” Oropesa said. “And then [they] make commentary that I find to be inappropriate.” Oropesa did not elaborate, but confirmed that she is still working on getting the full account of the arrest from Dean.

On Sunday, CL contacted Corporal Chuck Skipper—Public Information Officer for PCSO—to seek comment on these allegations. PCSO has yet to issue an official response.

Since the wave of recent Black Lives Matter protests across Tampa Bay, several prominent organizers have been arrested and detained on questionable charges, including:

Dean’s arrest comes in the wake of a specific interaction on June 27 in Hyde Park Village, caught on video, between local Black Lives Matter protestors and two Back the Blue counter-protestors outside of Timpano, an Italian steakhouse. Video footage shared to Twitter by Tampa Bay Times reporter, Josh Solomon, shows a “scuffle” between a middle-aged woman with a “Back TPD” sign and an unidentified #DumpDugan protestor—not Dean—who attempted to block the pro-TPD woman by stepping in front of her.

In the video, the woman’s husband proceeds to pull his wife back towards Timpano Italian Chophouse. As the woman is retreating back towards the building, it appears that she makes physical contact with the protestor who had been blocking her, grabbing their arm and pulling their hair. The Dump Dugan protester then turns back to the woman, as other protesters—including Dean—rush forward towards the three.

“Get the fuck back inside,” Dean can be heard saying in the video, with her hand on the door of the building. The husband grabs his wife and begins to pull her inside. Dean proceeds to close the glass door on the couple, leaving them inside the building.

Nearly a month later, despite this incident occurring in Tampa, Dean—a St. Pete resident—was arrested by PCSO deputies on two charges of false imprisonment and battery.

“It’s honestly really scary how organizers are being targeted,” Lauredan told CL. “This is a pattern of behavior by law enforcement.”

Dean works as a regional field manager for the civil rights and racial justice nonprofit Color of Change and is a founder and co-chair of the Restorative Justice Coalition.

According to a statement shared with CL, Dean says she was previously confronted at her home residence in mid-July by one St. Pete Police Department (SPDD) officer and detectives from Tampa Police Department who left a handwritten contact sheet identifying themselves by their last names (George and Campagnano). Both George and [Brian] Campagnano were armed with guns in their holsters. Detective George confronted Dean about a video that had surfaced online from the June 27 protest, depicting the encounter between Black Lives Matter protesters and counter-protestors outside of Timpano. Dean did not identify herself in the video, but described to Detective George what she saw. George asked her a series of questions about the incident, including why she was there. Without explicitly identifying herself in the video, Dean told the detective that she had been there to de-escalate the situation.

George questioned her de-escalation tactics incredulously, according to Dean, alluding to language she had used, as heard in the video. He also insinuated that Dean had “already” self-identified herself in the video. Dean said she still had not, but it was at this time that she told the detective that she wished to speak to her attorney before answering any additional questions.

He said that was “fine,” yet continued to ask her questions about the incident, according to Dean. At this time, detective Campagnano cut in to tell his colleague to wait until Dean had contacted her attorney. Campagnano went to his vehicle outside and retrieved the handwritten contact information for Dean. Dean says Campagnano instructed her to call him.

Following this confrontation, Oropesa, Dean’s attorney, tried to contact Campagnano herself to discuss Dean’s case. There was no response, which Oropesa admitted was strange—an anomaly in her two decades of practice in local criminal defense law.

Deciding to seek assistance from someone higher up, Oropesa emailed Mayor Jane Castor and City of Tampa spokesperson Ashley Bauman, twice, asking that if TPD was planning on arresting Dean, that she would prefer to coordinate a peaceful surrender—which she said would be more cost-effective for Tampa taxpayers, and safer for Dean. In these emails, she provided Dean’s pending case number. Oropesa says the two emails she sent to Castor and Bauman on July 20, went unanswered. CL reached out to TPD and Castor’s office to see why Oropesa’s inquiries went unanswered.

Instead, in a curious move, Dean was arrested a county over by Pinellas County Sheriff’s Office (PSCO) deputies—“exhausting resources of a neighboring county,” according to Oropesa—nearly a month after the incident for which Dean was charged.

“She [Castor] could have totally gone another route, a more preferable, a more advantageous route for the taxpayers and in order to maintain peace and in order to better relations between protesters, activists, and TPD,” Oropesa said, “And she—Jane Castor—chose not to do that.”

Attorney-activist Oropesa is a long-time vocal critic of Castor and has interacted with her in a professional capacity before. In addition to her work as criminal defense attorney, Oropesa runs the blog Florida You Judge and is the administrator of “Disaster Castor”, a website created during Castor’s 2019 mayoral run to inform voters of “serious issues” related to Castor’s tenure as Tampa Chief of Police.

“When other governmental agencies were in solidarity, joining the voices of those calling out for justice, she didn't join it until her city began to burn.”

“The bigger thing,” says attorney Oropesa, “is having a situation where, instead of choosing a peaceful surrender, coming upon Sadie in a situation that could have gone in the way of many of the cases that we see currently, where somebody gets shot up unnecessarily,” referring to the murders of Black individuals like George Floyd and Breonna Taylor.

Dean has been present at several Tampa Bay protests and rallies since the June 27 protest, including the Stand Up for Black Lives press conference held in downtown Tampa last month, where she was featured as a speaker alongside Army reservist and single mother, Joneshia Wilkerson. Wilkerson, whose life has been upended after being doxxed by TPD in June, is currently under investigation by the Pinellas County Sheriff.

Dean was originally slated to speak at a Rally for police brutality victims and survivors in Joe Chillura Park on Saturday. In a change of plans, she instead wrote a statement to be read at the rally by a fellow organizer on her behalf.

An online petition, Justice for Sadie, has been created to gather signatures of support for dropping Dean’s charges.

McKenna Schueler is a freelance journalist based in Tampa, Florida. She regularly writes about labor, politics, policing, and behavioral health. You can find her on Twitter at @SheCarriesOn and send news tips to mkaschueler@gmail.com.